Boston's latest server has 48 Opteron 6100 cores despite its very low price. Is this the best value 4P rack server yet, or has Boston made one too many compromises? 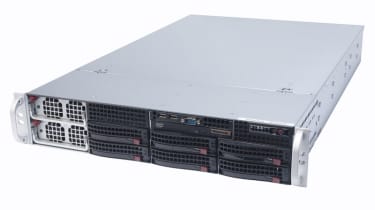 Supermicro's latest server is the cheapest 4P rack system we've yet seen. Supplied for review by Boston Ltd , the Green Power 1200-6 uses Opteron 6100-series processors and no less than 48 processing cores. Despite all this, it costs little more than a well specified dual socket Xeon 5600 system.

For once, AMD has a competitive advantage over Intel. Intel has nothing to compete with the Opteron 6100-series in the 4P small to medium business (SMB) space. The Opteron 6100 is available in 8- and 12-core variants and can be used in 1P, 2P and 4P systems. Intel's new 5600 Xeons only support 1P and 2P implementations and a quad-core Xeon 7500-series system will set you back around double the cost of this Supermicro server.

The Green Power 1200-6 on review came with four 2.1GHz Opteron 6172 processors, each of which has 12 cores giving a total of 48 cores. The 2U chassis height means you could fit 1008 cores into a 42U rack cabinet. This is the same as Dell's PowerEdge R815 which was the first quad-socket Opteron 6100 server to market.

In designing the 1200-6, Supermicro has fitted its new H8QG6-F quad socket motherboard inside its 2U chassis. Boston emphasises the server's performance and capacity. The server can handle up to six hot-swap drives and the price includes four high performance 300GB Seagate Cheetah 6Gbps SAS drives.

The motherboard covers every possible disk interface permutation as it has six SATA and eight SAS embedded ports. The SATA ports are handled by an Intel controller which offers stripes and mirrors whilst the SAS ports are managed by an LSI SAS2008 chip which supports SAS 2.0 speeds.

The four drives in the review system were preconfigured as a RAID-10 striped mirror but you can upgrade the LSI controller with a key to bring in support for RAID-5 arrays. If you want cache memory, a battery backup and RAID-6 you'll need to consider adding a separate expansion card. It's here that the PowerEdge R815 wins out as our review sample had Dell's H700 RAID card installed. This included a healthy 512MB of cache memory, a battery backup pack and support for all key RAID array types.

Power redundancy is included in the price, as Boston as included a pair of 1400W hot-plug supplies. Although power is connected at the back, the supplies are accessed from the front so you don't have to go rummaging in the depths of your rack cabinet to replace a failed unit.

The 1200-6 also scored well in our power consumption tests where we measured it sucking up 335W in idle and peaking at 703W under extreme load from SiSoft Sandra. Its idle rating is identical to a very similarly specified R815 but around 85W greater under load although this can be put down to the higher output supplies provided by Boston.

Lid removal could be made easier as the two push buttons on the review sample kept sticking and often needed some persuasion to release. However, the server presents a very tidy interior with easy access to all critical components.

Each processor is accompanied by eight DIMM sockets with the price including 64GB of fast 1333MHz DDR3 memory. A top capacity of 512GB makes the 1200-6 a good candidate for virtualisation, although you only have a single internal USB port if you want to use an embedded hypervisor. However, Dell's R815 also has pair of SD card slots allowing it to provide hypervisor boot media redundancy.

Six hot swap fans handle chassis cooling and most of the motherboard is covered by a large, transparent shroud to help direct airflow. The 1200-6 isn't as quiet as the R185, which is almost silent, but in a rack cabinet installation its low noise levels won't be an issue.

Supermicro's embedded Remote Management Module (RMM) provides dedicated remote management access to the server regardless of its condition. You can power it off and on, reset it or gracefully close down the operating system, view a wide range of sensors for critical components and fire up a remote control session. Whereas the likes of HP, IBM and Dell expect you to buy an upgrade to get remote control and virtual media services, Supermicro includes these free. The RMM does provide a good range of essential management features but with the focus now moving sharply to power management and monitoring, Supermicro would do well to consider adding these features to its solution.

When we reviewed the PowerEdge R815 we were impressed with its features and design and felt that Dell had set a very high standard for the rest follow. Boston's Green Power 1200-6 doesn't quite match up to the R815 for features and build quality, but it easily sets the mark as the lowest cost quad Opteron 6100 server currently on the market. With a price tag of just over 8,000, the Green Power 1200-6 is good value as it costs less than half that of an equivalent 4P Xeon 7500 system. It's a good choice for SMBs looking to move up to 4P servers, possibly with a view to consolidating older 1P and 2P systems.

The Boston Green Power 1200-6 offers lots of processing power at a very reasonable price. It can’t match Dell’s PowerEdge R815 for design, features and remote management capabilities but it is better value making it a good choice for budget conscious SMBs looking for a server consolidation platform.