We managed to get our hands on the latest Blackberry, the touchscreen Torch 9800, at RIM's London press conference to give you an idea of what to expect from this eagerly anticipated smartphone. 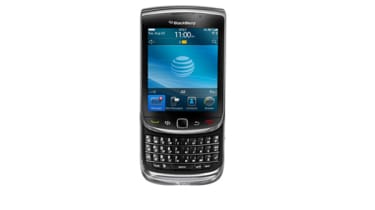 RIM has been a leading innovator in the smartphone and business phone market since it stormed the scene with the first Blackberry in 1999. Although the company has been left behind when it comes to touchscreen phones, the BlackBerry Torch 9800 could change all of this.

RIM's previous touchscreen attempts, the Storm and Storm 2, were a little disappointing to say the least, with a clickable display rather than highly responsive capacitive screen. The Canadian manufacturer has now introduced capacitive technology in the BlackBerry Torch 9800 and it's a very welcome change.

The screen measures 3.2in, which may not be the biggest screen out there, but is still big enough for most tasks. It also has a lower resolution than other high-end phones, such as the HTC Desire or iPhone 4, at 360x480 pixels. However, like the BlackBerry Bold 9700, the screen does look stunning. It's bright and crisp just as you'd like a smartphone's display to be. The capacitive screen is much more responsive than the Storm's SurePress clicky screen that moves under your touch. It's just as simple to swipe across the screen, tap icons and use multitouch gestures as it is on the HTC Desire.

The benefit of the responsive screen is immediately obvious when it comes to the BlackBerry Torch 9800's browser. Using multitouch, you can zoom into the page and the text will adjust so it's readable. RIM seems proud of the fact that the text size will change to your default text size (set in the main settings menu), so it'll always be comfortable for you to read.

The WebKit-powered browser makes viewing web pages a breeze in comparison to older BlackBerry browsers that mangled the rendering of web pages. Other highlights include tabbed browsing, which is something the BlackBerry browser has required for a long time. You can easily switch between tabs with a tap, so browsing multiple pages is a breeze.

The slide-out Qwerty keyboard is one of the main features of the BlackBerry Torch 9800. It's the same high-quality keyboard familiar to BlackBerry Bold 9700 owners. The keys sit comfortably under the digits and are perfect for speed typists.

You can opt for the virtual touchscreen keyboard instead, although we're not sure why you'd want to since the slide-out keyboard is so good. There are four virtual keyboards portrait Qwerty, landscape Qwerty, BlackBerry SureType and alphanumeric. None are as usable as the hardware keyboard, but it's down to personal choice.

One of the major overhauls with the BlackBerry Torch 9800 is the OS. Alongside the touchscreen and Qwerty slider keyboard comes BlackBerry OS 6 probably the most anticipated RIM-developed OS so far. The interface will be familiar to users of previous Blackberrys, but it's much simpler for first time users.

Social network feeds work in the same way. When someone has posted a new status in Twitter or Facebook, a push notification will appear and you can view the person's profile picture alongside the status update. Tap on the update and the application will open to show you that person's profile.

Another highlight of BlackBerry OS 6 is the customisable homescreen. There's a bar at the bottom of the screen that allows you to swipe left and right to view your apps in five categories. These categories are pre-set to All, Favorites, Media, Downloads, and Frequent. Tap on any of these to view the apps in each category and then tap on the app icon to open the application. In Favourites, you can also add shortcuts to websites and contacts.

At the top of the homescreen, there's a Universal Search tool similar, but more functional than Spotlight Search on iPhone. Type in any text and the Torch will try to predict what you're typing. The results list shows all of the contacts, messages, calendar, music, and pictures that match your search criteria, in addition to online content such as YouTube videos, apps for download from App World and Google search results.

Apparently, we can expect richer applications with the release of new APIs. Existing BlackBerry apps will be compatible with OS 6, although this is something we'll have to confirm when we get the BlackBerry Torch in for fuller testing.

The BlackBerry Torch 9800 may not have as powerful a processor as the ones found in the iPhone 4, HTC Desire or Samsung Galaxy S, but it does have the most powerful processor on a BlackBerry to date. We've never struggled with speed issues on previous BlackBerrys though and the Torch 9800 speeds through every function. Although we weren't able to fully test its speed capabilities in our limited time with the phone, it seemed pretty good at handling multiple operations with its 624MHz processor.

A 4GB microSD card comes with the smartphone, but you can replace it with cards as large as 32GB if you need more storage. Battery life has also always been a main benefit of RIM's handsets and this doesn't look to change with the BlackBerry Torch, although we didn't have enough time to test this at RIM's London launch event.

There's no denying that the BlackBerry Torch 9800 could add some competition to the touchscreen smartphone race. The new OS and UI is stunning, the screen is responsive and BlackBerrys have always excelled for business users, with RIM's BIS, BES and now BESX experience.

The BlackBerry Torch 9800 could be a game changer for RIM. Previously, the devices have focussed on business, but the Torch combines business, multimedia and other leisure applications meaning it can be used as a phone for work and play.