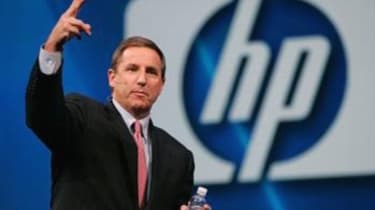 Mark Hurd made a speedy departure from his job as chief executive (CEO) of HP on Friday.

He resigned following revelations he had made inaccurate expense claims and attempted to cover up a close personal relationship with a female contractor.

Cathie Lesjak, HP's chief financial officer (CFO), was immediately appointed as interim CEO, but she stressed this was a temporary measure until a new CEO is appointed. She has no interest in taking the job as a permanent position.

Hurd's suspect claims were exposed during investigations into a sexual harassment accusation by former HP contractor Jodie Fisher. A private financial settlement was agreed between Hurd and Fisher and the case was dismissed by HP as not contravening the company's policy.

In a press call last Friday Mike Holston, general counsel and executive vice president for the HP Development Company, said: "Mark had a close personal relationship with an HP contractor who was hired by the office of the CEO and Mark never disclosed that relationship to the Board of Directors."

"The investigation revealed numerous instances where the contractor received compensation and/or expense reimbursement where there was not a legitimate business purpose," he continued, "and the investigation found numerous instances where inaccurate expense reports were submitted by Mark, or on his behalf, that intended to, or had the effect of, concealing Mark's personal relationship with the contractor."

Fisher, a former actress, was hired to plan, market and host events for the office of the CEO. According to sources quoted by Reuters, several expense claims submitted by Hurd, or his aides, made no mention of Fisher's presence and instead stated he dined alone or with his bodyguard.

Gloria Allred, Fisher's lawyer, claimed Hurd and Fisher did not have a sexual relationship and that Fisher regretted placing Hurd in an untenable position.

In a written statement, Hurd, who is married and has two children, said he was resigning because he had not lived up to his own standards of integrity.

Hurd will receive a severance payment of $12 million (7.5 million) and $16 million (10 million) in stock. He has also undertaken to pay back the $20,000 of misappropriated expenses.

He took over as CEO after Carly Fiorina's departure in 2005 and during his five-year tenure he increased the company's market value by 224 per cent to $108 billion (68 billion).

The resignation has come at an inconvenient time for HP, which is undergoing an expansion programme headed by Hurd. A CEO search committee has been formed to find suitable internal and external candidates for the role.