A desktop replacement laptop that looks stylish and has long battery life too. What's the catch? 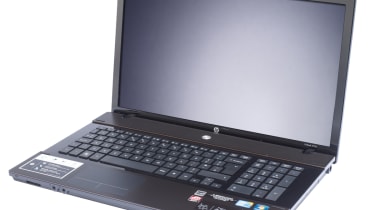 Most laptops aimed at businesses look rather staid and boring, but the HP ProBook 4720s is surprisingly stylish. The brown metal wrist rest, lid and speaker grille look great and blend in well with the rest of the black plastic construction. It's a bit chunky, but it feels reassuringly sturdy.

The ProBook has a 17.3in screen and is a desktop replacement laptop, so as well as weighing 3.1kg, it's quite large. It's not ideal for travelling, so we were surprised by its lengthy battery life of six hours and 13 minutes in our light usage test - one of the longest times we've seen for a 17in laptop.

The ProBook's screen has a matte finish so it doesn't reflect light from overhead sources, such as fluorescent ceiling strips, minimising glare. However, it doesn't look as bright and punchy as many glossy displays. It's still reasonably bright though and viewing angles are quite wide. Plus, the 1,600x900 pixel resolution is great for working on a large spreadsheet or a pair of documents side-by-side.

Tying was accurate thanks to the large, responsive keys which give just the right amount of feedback. There's a numeric keypad for quick number entry in spreadsheets and no undersized or oddly placed keys, either.

Unfortunately, the touchpad isn't nearly as impressive. Although it's large and accurate, the two buttons are built into the bottom of the pad itself. These are too stiff so some force is needed to press them, which can also inadvertently move the cursor. This makes some tasks, such as dragging icons, harder than they should be. It's profoundly frustrating and a problem we've seen on other HP laptops recently. The one beneficial effect of this infuriating design is that it makes the pad very large which makes it easier to perform multitouch gestures, such as pinching to zoom in and out of images.

Security-conscious users will appreciate the built-in fingerprint reader which can be used instead of a password. It's also possible to disable the USB ports and the memory card reader from the BIOS, making it more difficult for users to copy sensitive data off the hard disk without authorization. The BIOS is also automatically password or fingerprint protected, so this sensitive setting can't be easily changed.

There's no integrated 3G modem or USB3 ports, but these features can be added later using the ExpressCard/34 slot. The 250GB hard disk is stingy at this price, but should be large enough if you're storing only business documents. HP has been stingy with memory, too. The 2GB of RAM is enough for running Windows and several programs simultaneously, but should you want to add more, it's rather time-consuming to get to the memory slots and hard disk bay.

It's a shame that the ProBook doesn't have a Core i5 processor like similarly priced consumer laptops but it's by no means slow. Its i3 350M is still fast enough for most tasks, though, scoring 80 overall in our benchmarks. The Mobility Radeon HD 4350 graphics chips has its own dedicated 512MB of memory instead of sharing main system memory like an integrated graphics chip. This dedicated graphics chip may look out of place on a business laptop, but it can be used for more serious work instead of gaming. Some applications, such as Photoshop, have been rewritten so they can use a graphics chip to boost performance.

The ProBook looks great and has some useful security features. We were impressed by its battery life, but its weight means this isn't much of an advantage. This, in addition to the poorly designed touchpad as well as a miserly amount of RAM and hard disk space, prevents the ProBook from receiving our unconditional recommendation.