We take a look at the latest preview release of IE9 to see if it really is faster and more standards-compliant than other web browsers. 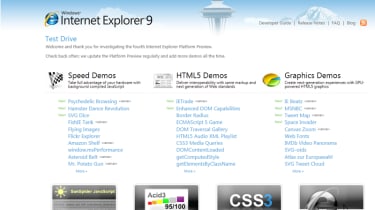 The latest test release of Internet Explorer 9, Platform Preview 4 (PP4), is also the last before the newest version of Microsoft's browser enters beta. With PP4, as with previous platform previews, Microsoft has concentrated on improving rendering performance and compliance with web standards. This means that, when it's released, Internet Explorer 9 should load web pages quicker than ever, while making things easier for website developers.

PP4 achieves a score of 95 on the Acid 3 web standards compliance test. Compared to 83 for Platform Preview 3 and just 20 for IE 8, this is the highest score of any IE version yet. That's one point higher than Firefox's 94, though it doesn't match the perfect 100 scored by browsers like Opera. Ryan Gavin, the senior director on the IE team, says it's unlikely to go higher in the beta or release version; "I expect that's where we'll be at." He points at the 2,138 other tests that IE 9 has passed (covering HTML 5, CSS 3, JavaScript and the new EcmaScript 5 standard); that includes an additional 519 tests for PP4 devised by Microsoft. The company is donating the tests to the W3C so they can be used as the basis of a full test suite; in the mean time they're online at the IE Test Center for comparison in other browsers.

The missing five Acid points are from the SVG fonts, filters and SMIL SVG animation features, but Microsoft downplays the importance of these parts of the Acid test. The company has always said it will not support these features in IE 9 since standards groups are planning to change them and there are other methods of doing the same things. The SVG Working Group is planning significant changes to filters and animation and has suggested moving SVG fonts into a separate and optional specification; the creator of the Acid 3 test has also suggested that in future the test might drop SVG fonts.

PP4 adds support for even more of the areas of the SVG spec. Previous platform previews haven't worked with some of the more complex SVG content that's already up on the Web. PP4, however, loads far more of these SVG sites and passes another ten new SVG tests, including some that Firefox 3.6, Safari 5, Chrome 5 and Opera 10.6 fail. It also further improves SVG performance, which can be seen in the new SVG dice rolling demo . As with many other performance improvements, the smoothness of the animation of the SVG images of the dice and dice cup is due to PP4's support for hardware acceleration using the graphics chip. The performance improvements are impressive, even on Nvidia Ion-based netbooks.

Microsoft has added several more amusing demos to its IE9 website showing the potential speed increases achievable using the graphics card-based hardware acceleration. IE Beatz is an interactive beatbox that showcases hardware-accelerated audio at the tempo of your choice (other HTML 5 browsers can't keep up with high tempos). Psychedelic Browsing animates colours and patterns using the Canvas HTML 5 tag. Hamster Dance Revolution is a remarkably silly but effective app that proves you don't need plugins like Flash or Silverlight to create interactive games.

However, Microsoft isn't suggesting that IE 9 will kill Flash or its own Silverlight plugin; Microsoft UK Web product manager Mark Quirk was quick to say "I'm sure the trend will continue of plugins providing more than browsers can do and doing that outside the [HTML] standards process because of the time it takes [to define a standard]."

The new Chakra JavaScript engine continues to get faster and PP4 marks a significant milestone - the improved SunSpider JavaScript test score puts IE 9 ahead of Safari 5, Opera 10.6 and Chrome 6. However, the IE team believes that the way browsers deal with JavaScript on real Web sites will be more affected by the fact that PP4 integrates the JavaScript engine into the browser rather than making it a separate component. While a separate scripting engine is easier to replace, this is more useful for open source browsers that choose to mix and match JavaScript engines than to IE with its proprietary engine.

An integrated JavaScript engine doesn't have the overhead of using the COM subsystem in Windows to communicate with the browser. Integrating the JavaScript engine also means that it shares the same document object mode with all the other subsystems inside the browser. This should make JavaScript faster, but the speedups won't apply to other script languages like Perl and VBScript, which will still work with IE 9 but don't get access to the single, consistent view of the document.

From bugs to beta

Microsoft has received over 1,300 pieces of feedback on IE 9 through its Connect website. 100 bugs from earlier previews have been fixed in PP4 and "we continue our commitment to addressing and closing every single piece of feedback we get," promises Ryan Gavin.

Like all the platform previews, PP4 doesn't have the interface or any of the new features that will come in the beta, including the new network stack - these should begin arriving in September. Microsoft is urging developers to try out their sites with PP4 now to see if they'll render correctly because it's going to reach a lot of end users, says Quirk; "Our plan is that anyone who understands how to install and uninstall software can install it and will."

Microsoft's advice for website developers is to use the same code for IE 9 that they would for other browsers instead of creating IE-specific code. "The mantra around same markup is write the same HTML for IE that you would for Chrome and Firefox," explains Quirk. "Let's not have different paths". From our testing with PP4, this advice is valid in many cases.

The issue is when you've used Mozilla, Chrome and WebKit-specific prefixes to get CSS 3 features, because IE 9 doesn't need (or load) browser-specific prefixes. It's also a little easier to check your pages in PP4; the already useful network capture tool that helps you trace the way your Web site works now lets you search through the data it captures.

As with the other platform previews, Microsoft has delivered an impressively fast, standards-based rendering engine. In September we’ll be able to see if the performance is matched by the interface and features.