If the rumours of Google Me prove to be true, who will win out in the battle of the social networks? We look at the fight blow by blow. 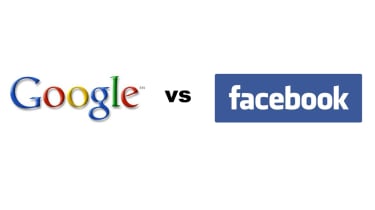 Facebook has long been the dominating force when it comes to social networks. Even with the likes of Twitter and LinkedIn, Mark Zuckerberg and his team have felt pretty safe with the crown.

However, now arguably the world's biggest internet player, Google, is rumoured to be working on its own social network dubbed Google Me and with its acquisition today of Slide, these rumours look to be turning more into a reality.

So what will Google have over Facebook if this launch becomes reality? Or is the strength of Facebook too much for the search giant to take on?

We take a look at how the companies compete when it comes to social networking nous and if this could benefit your business.

How could Google take number one spot?

One search to rule them all

Google is undoubtedly the king of search, despite the best efforts from the likes of Microsoft and Yahoo, but search is increasingly becoming a useful tool in social networking.

Twitter is renowned for its trending topics and now Facebook has jumped into the game with its Questions offering.

If search continues to grow and ends up playing a large part in this area of the web, Google is more than ready to exploit this aspect.

Email within the network

If convergence is the way the IT industry is heading, and with one Facebook employee suggesting the death of email is nigh, integration of clients into social networks seems a likely way forward.

Google surely has the upper hand here. Gmail may not be the market leader in the email client segment, but it undoubtedly has greater functionality than the Facebook messages service.

Having said this, Gmail could do with making itself a little more attractive and user friendly. Let's not forget social networks are meant to have an element of fun and the straight-cut look of Google's service does not have the right jovial aesthetic nailed just yet.

Nonetheless, it would be handy to have all your messages in the same place as profile postings, group updates, silly pictures et al.

Documents all come together

It is not just email integration with Gmail that will be so handy, especially when it comes to businesses.

Google Me could include integration to the likes of Google Docs, Google Calendar, Google Sites and Google Groups; well established business tools when stood alone but perhaps all the more useful when linked into a social network.

Facebook doesn't have anything to compete with this on a business level so could be left out in the cold by companies looking to extend their social media reach.

If there is one area a burgeoning social network can be confident in trumping Facebook it is surely privacy. The intense scrutiny Zuckerberg's baby has been under in recent months is enough to convince anyone planning such a site to place user data protection at the top of their priorities.

Google would do well to make privacy settings flexible and simple to understand from the off and while Facebook has been working on this in earnest, there is still plenty of ground for improvement.

Other additions, such as providing the user with control over what apps can access their personal data, could prove vital in keeping people feeling secure.

The search giant may want to look at its own gaffs as well, however. The recent Wi-Fi Street View scandal proved to Google how important it is to be careful with people's information.

Protection from outside threats will also be key for any new social network. Any Google service would need to offer a solid defence against the range of attacks now hitting services, from clickjacking to malicious links.

Although MySpace is not posing a considerable threat to Facebook's domination, at least it allows for greater customisation of homepages than other options. Twitter, too, at least lets users change their background.

Facebook is extremely limited in this area due to its primary focus on information sharing and it is missing out.

Wouldn't it be great if you could add your own backgrounds, select fonts for your page, decide where you are directed to after logging in, choose the layout of the interface, get rid of ads if they are becoming too irksome and make your entire profile a real representation of yourself?

Google has not excelled in this area yet, but there is clearly a window for opportunity here for some experimentation something that the search giant loves.

For all the new and shiny functionalities that Google Me could bring, Facebook is well and truly established in both its user's browser and the world of technology.

Just last month Facebook announced it had broken the 500 million user mark, adding over 100 million in just four months. It is so popular they are even basing a Hollywood movie on it.

No matter how good any attempt by Google might be, it will have someway to go before achieving such a following as its rival.

One problem for Google could be that it simply has fingers in too many pies. It has forayed into numerous areas with varying degrees of success and will have to manage its manifold services simultaneously. Furthermore, it has not directly taken on a force as big as Facebook before.

Zuckerberg, meanwhile, is one of the most driven and focused men not just in the tech world, but in the business sphere as well. Facebook has a clearly defined vision and this is unlikely to change given its creator has refused offers to sell for billions and often reiterates his unwavering information-sharing ethos.

Not only does Facebook have an established audience, it also has a range of features that would be pretty hard to improve on.

Although the news feed is something of a procrastination inspirer, it is difficult to see how it could be bettered. Perhaps more filtering of what content goes up would be beneficial, but this would not be a radical enough change for anyone to claim a win over Facebook.

The profile wall feels almost like an industry standard now, with its simple functionality and clear options, while sharing, status updates, group pages and wall-to-wall interactions are again straightforward and effective.

And who doesn't enjoy the occasional poke?

Everyone might be excited about the prospect of a Google social network, but when it previously dipped its toe into this world, success was not forthcoming.

Just last week Google called time on any further development of its Google Wave project, citing the reason as a lack of interest from users.

The offering came across to many as complex and left users feeling cold, compared to the ease of use and relative warmth of Facebook.

Perhaps Google Me will take more of a lead from its rivals, but this hiccup of Google's on its path to social networking heaven may be a significant bump in the road.

Google will find it hard to find an exciting gap in the social networking sphere if it enters the market one that is perhaps verging on saturation as it is.

Twitter has micro-blogging down, MySpace still has the new music draw and Facebook has plenty of other areas covered. It is tricky to figure out what Google's main selling point would be if Me was introduced.

Google's acquisition of gaming company Slide perhaps hints this is one of point of entry the company is targeting, but Facebook already has a number of popular titles, from football games to Farmville. Are web-based games even good enough to keep the masses entertained anyway?

In the end, something revolutionary may be required from Google for it to make a big enough splash and get people migrating away from the behemoth that is Facebook.