Sony's latest ultra-portable laptop is packed full of features, but are these enough to justify its high cost? 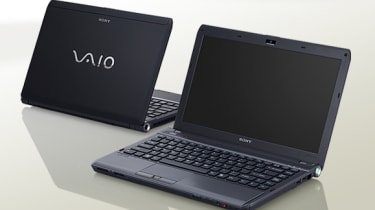 Sony is well known for it stylish laptops aimed at home users and other consumers. The Japanese giant has long had a range of laptops aimed at business users though and the company's latest S-series Vaio, the VPCS12V9E/B, is its latest model. The simple, black appearance is plain yet stylish in an understated way and looks like a less colourful version of the Vaio Y series. The VPCS12V9E/B has a built-in DVD writer yet still manages to weigh just 2kg which is light enough to carry around all day.

Despite being quite light, the VPCS12V9E/B feels very rigid and sturdy. The only exception is the lid which flexes under pressure, but it doesn't feel nearly as cheap as other laptop lids we've seen. The underside didn't become uncomfortably warm either. The battery lasted six hours and 11 minutes in our light usage test, where it scrolls through a series of web pages continuously, which is long enough to last a transatlantic flight. This is impressive, but we've seen cheaper ultra-laptops aimed at consumers with even longer battery life. However, those models can't match the VPCS12V9E/B's processing performance.

The VPCS12V9E/B comes equipped with a powerful Core i5 processor and a whopping 6GB of RAM. It therefore excelled in all our applications benchmarks, scoring 94 overall, so it should be able to handle tough tasks for some time to come. The Nvidia GeForce 310M graphics chip has its own memory rather than sharing main RAM. It can be used to speed up applications designed to take advantage of it, such as Photoshop, but such programs are thin on the ground.

Fast performance in a laptop is of little use if the keyboard and touchpad aren't very comfortable to use. Luckily, we were impressed with the VPCS12V9E/B's large and responsive keyboard. It's very comfortable to type on. The backlit keys illuminate automatically in dark conditions, which typists of all skill levels will appreciate, although you can't manually adjust the brightness as you can on the Apple MacBook Pro laptops. The touchpad is large and accurate, with buttons that give just the right amount of feedback when pressed.

If you're concerned about security, then you'll appreciate the fingerprint reader. This can be used to lock your computer instead of a login password. Sony's included software can create encrypt files and these too can be locked and unlocked with a fingerprint instead of yet another password. There's an option in the BIOS to clear stored fingerprints. While this is a useful option if you injure your finger, it's also a potential security loophole. Fortunately, it can be closed easily enough by password protecting the BIOS.

The two year warranty only provides for collect and return service which is a little disappointing at this price. A three year extended warranty plan that provides onsite service is available, but this costs an extra 207. This seems high, but this is in line what we would expect for an extended warranty.

Unlike most other business laptops, the VPCS12V9E/B has a glossy instead of a matte screen. Light reflected off the glossy screen can cause glare which can look distracting. Most glossy screens offset this by being very bright, even when brightness is turned down to conserve battery life. However, the VPCS12V9E/B's screen, while by no means dark, isn't as bright as we'd expect, especially compared to other glossy screens we've seen. It also has a slight grainy sheen which can spoil the look of some images.

Sony's latest Vaio S series laptop is well-specified, comfortable to use and lightweight. It's not perfect though and the very similar but cheaper Vaio VPCS12L9E/B is a better value alternative. It has a slower Core i3 processor instead of an i5 chip, has 4GB instead of 6GB of RAM and doesn't have a built-in 3G modem or fingerprint reader. If you can live with these compromises, you can save around £320.