Apple's latest Mac Mini looks great thanks to its unibody aluminium design. Read our full review to find out if it's good value or not. 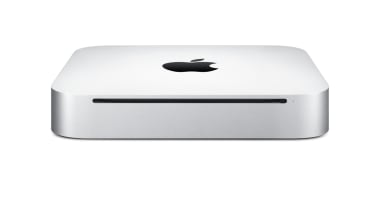 Since it was first introduced in 2005, the compact, biscuit tin-sized Mac Mini has been Apple's smallest and cheapest desktop computer. This latest model has been significantly redesigned, both internally and externally. However, while the previous Mini was available for 500, the new model costs 650. Several criticisms of the older versions have been addressed though.

The new Mini sheds the previous white plastic and aluminium case in favour of a sleek and sturdy all-aluminium design that's noticeably easier to upgrade than the older version. Previously, simple upgrades required disassembling the entire computer using screwdrivers and a spatula which was time-consuming and fiddly. Now, a simple, twist-to-remove bottom plate gives easy access to the RAM slots. Disappointingly, reaching the hard disk still requires significant disassembly. Although one could add an external USB2 or FireWire 800 disk instead, this also takes up more room which partially defeats the point of having a mini desktop computer.

Although the Mini is a bit shorter than its predecessor, it is also a few centimetres wider and deeper. This is actually quite impressive, as Apple has somehow managed to squeeze the previously brick-sized power supply inside the aluminium case. Despite this, and the small cooling vent, the Mini never became worryingly hot during our demanding Windows-based applications benchmarks.

The integrated power supply does mean that it would be far more difficult to replace in the unlikely event it ever develops a fault. The older external brick design can be replaced very easily, while the new integrated design requires servicing by an Apple engineer. Fortunately, Apple does provide onsite service, but only as part of its AppleCare three-year extended warranty which costs an extra 129. The standard one year warranty only provides for collect and return service or you can take it down to an Apple retail store which isn't always convenient, especially with more than one or two computers.

The Mini is Apple's first computer to have a HDMI port, with a HDMI-to-DVI adapter is included in the box. There's also a Mini DisplayPort connector, so connecting dual displays is simple. There's a SDXC memory card slot, the first we've seen on any computer. SDXC memory cards currently go up to 64GB in size and, on paper, could reach 2TB in size. Since the MacOS can be installed onto a SD card, the SDXC slot partially makes up for the inaccessible internal hard disk.

There are four USB2 ports down from five on the previous model we suspect the fifth was jettisoned to make room for the memory card slot. There's a FireWire 800 port, which also works with FireWire 400 devices using an adapter cable (which isn't included), but there aren't any USB3 ports. Annoyingly, all of the ports are located on the rear where they could be hard to reach a front-mounted USB port and memory card slot would be much more convenient.

The Mini comes equipped with a Core 2 Duo P8600 processor and Nvidia GeForce 320M integrated graphics. We suspect Apple chose not to opt for a newer Core i3 or i5 processor so it can continue to use Nvidia's integrated graphics chips and motherboard chipsets instead of slower Intel alternatives. Apple can't pair a Core i3/i5 processor with an integrated Nvidia graphics chip, since Intel has forbidden Nvidia from producing Core i3/i5-compatible chipsets. Although the P8600 is fast enough for most tasks, scoring 70 overall in our benchmarks, it's starting to show is age compared to faster Core i3 and i5 chips. In spite of all this fuss, the Nvidia GeForce 320M graphics chip is only of real use if you frequently use applications that are capable of using it to increase performance, such as Photoshop.

We were irked by the measly 2GB of RAM and 320GB hard disk. We'd expect more at this price, although the hard disk is big enough for storing office files and at least adding RAM is easy. No keyboard, mouse or monitor are included but these are easy enough to come by. You'll almost certainly want a Mac-specific keyboard though, as there are a few subtle but important layout differences between Mac and Windows keyboards, mostly affecting frequent users of keyboard shortcuts.

The newest Mac Mini is a big improvement over the last version. Although we like the generally elegant design, it isn't perfect. There's still room for improvement, such as easier hard disk access and more conveniently located ports. It's a little overpriced for the specification too, since mini Windows PCs are available for less, while some all-in-one Windows computers cost around the same price. The Mini is still the cheapest way to get a Mac, but if you can live with Windows there are better value compact computers available.