Fujitsu delivers the first eight-socket Xeon 7500 rack server to market and it’s a beast. In this exclusive review we heft this enterprise-level system onto the lab bench and see if it’s a RISC slayer. 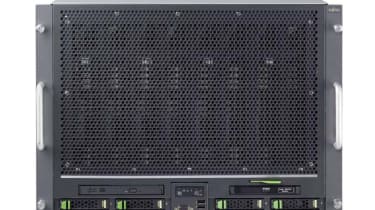 Since Intel launched its Xeon 7500 family of processors earlier this year we've exclusively reviewed a number of four-socket systems but Fujitsu's new Primergy RX900 S1 takes the honours as the first eight-socket production server to market. In our Xeon 7500 benchtest in our sister title PC Pro we alluded to a glue-less' design that doesn't require a custom chipset. This allows system designers to expand beyond four sockets just by using the onboard QPI (Quick Path Interconnect) links and the RX900 S1 is the first to have this in a single system.

IBM does have an alternative method of creating an eight socket system. However, as we saw in our exclusive review of its x3850 X5 , the base system is a four-way server which is expanded by adding a second x3850 and linking the two together using IBM's X5 scalability cable kit. The RX900 S1 is a far simpler solution as everything you need to create an eight-socket server is inside its 8U chassis. This allows it to scale easily to 64 physical and 128 logical processor cores.

The base system starts where 4-socket systems end as it comes with a minimum of four cold-swap processor/memory riser cards. You can easily expand to six or eight sockets as demand dictates and the sixteen DIMM slots on each card allow memory to be expanded to a mighty 2TB of DDR3 when 16GB modules becomes available.

The RX900 S1 offers a range of memory reliability features as, along with interleaving, it supports both intrasocket and intersocket memory mirroring. This allows mirroring to occur within the memory controllers on one processor or across different processors but the latter is only supported when you have six or eight riser cards.

We thought the expansion potential of the x3850 X5 was impressive but the RX900 S1 takes this into the stratosphere. Internal design is particularly good giving easy access to all key components. The top panel is split into three sections where the middle one provides quick access to the four hot-swap cooling fans. Underneath the rear panel are all the PCI slots whilst the front panel slips off to reveal the processor/memory riser cards.

Onboard storage is provided by eight SFF (small form factor) hot-swap drive bays. Our review system included four 147GB 6Gbps SAS drives, but Fujitsu also offers SATA and SSD options as well. The drives are linked to an eight-port SAS controller which includes 512MB of cache memory and a battery backup pack. Even better is the fact that it uses its own dedicated slot, leaving all the PCI-Express slots free for use.

There's room for up to sixteen PCI-Express cards more than double that of the x3850. The PCI-Express slot arrangement comprises a removable vertical carrier to one side at the back with room for up seven low-profile cards. The motherboard offers a further nine PCI-E slots, also half-length, but four of them support hot-plug capabilities.

There are six gigabit Ethernet ports, as well as a pair of embedded 10-Gigabit Ethernet SFP (small form-factor pluggable) ports. Alongside the bank of Gigabit ports is a network service port which provides access to Fujitsu's iRMC S2 controller for remote monitoring and management. It has a well designed web interface with status views of critical components and full access to all power controls. Power monitoring is provided so you can watch graphs of power consumption but budgeting, which adds options for the best performance, minimum power settings or power capping, will only be supported in a later firmware upgrade.

Whereas Dell, IBM and HP want to look after your entire network infrastructure, Fujitsu is only interested in servers so its bundled ServerView Suite software concentrates on managing your Primergy boxes only. It provides a top level ServerList interface which displays all systems with the agent installed and offers full hardware inventory, system status displays and fault notification.

The RX900 S1 offers plenty of power redundancy with up to four compact 2025W hot-plug supplies. With four top-end X7560 2.26GHz Xeons and 256GB of memory we expected consumption to be high, but our tests showed it wasn't excessive. Using our in-line meter linked to a pair of the power supplies, we measured a draw of 750W with Windows Server 2008 R2 Enterprise in idle. Using SiSoft Sandra to push all the 64 logical cores in the review system to the max, we recorded a peak consumption of 1091W.

This is higher than the IBM x3850 X5 which recorded 485W and 835W for these two tests. However, it only had a quarter the memory and four lower power 2GHz X7550 Xeons. It's also worth bearing in mind that scaling an x3850 X5 up to two linked systems will probably result in a much higher power draw that the single chassis RX900 S1.

None of the other blue chips currently have anything that can compete with the RX900 S1. HP's much vaunted ProLiant DL980 G7 has yet to make an appearance, IBM doesn't offer a single eight-socket chassis and it's debatable whether Dell will even venture into this territory. This puts Fujitsu in a unique position and the RX900 S1 sets a very high standard for those that follow.

Fujitsu takes the honours with the first single chassis eight-socket Xeon 7500 server and lays a very big gauntlet down to HP and IBM. The RX900 S1 is well designed, offers very high levels of redundancy and has huge expansion potential making it a cost-effective alternative to expensive RISC based systems.