Acer's latest Android smartphone is packed full of features, but features aren't everything as our in-depth review reveals. 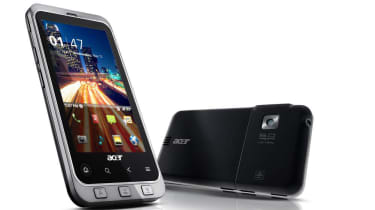 Acer's attempts at carving out a niche for itself in the smartphone world are broad ranging. The company has feet in both the Android and Windows Mobile camps, and it even sells a special Ferrari edition of its Liquid E Android handset to complement its association with the Italian supercar manufacturer in the notebook area.

The Acer Stream is a high end Android-equipped handset that sits at the top of the company's smartphone range. Its top notch specifications will appeal as much to consumers as to businesspeople. The hardware design feels impressively well-built. Like many other Android manufacturers, Acer has come up with its own interface skin which will probably please some users as much as it annoys others.

The Acer Stream is not an inexpensive smartphone. An exclusive with online specialist Expansys, it currently sells for 399.99 inc. VAT. For that kind of money you have a right to expect top-notch specifications, and you get them.

As one would expect, GPS, Wi-Fi and HSDPA are all present. The Wi-Fi includes support for the b, g, and n standards. The latter is currently a rarity in smartphones and it should help when using apps that benefit from high network bandwidth, such as UPnP media streaming apps. The HSPA 3G cellular support means that, on paper, downloads can reach 7.2Mbps and uploads up to 2Mbps. The speeds you'll actually encounter will depend on numerous factors including your mobile network and your location.

The processor is a Qualcomm Snapdragon running at 1GHz and we didn't experience any lag or delays in the user interface. The stunning 3.7in AMOLED display has a resolution of 800 x 480 pixels. The large screen also increases the overall size of the Stream. It measures 119.5 x 63 x 11.2mm, so it could be difficult for many people to reach across the screen to make full one-handed use of it.

Like Motorola's new XT720 Android smartphone, the Acer Stream has HDMI-out support. A standard micro-HDMI connector sits on the right side of the phone and the cable is included in the box. You can use this to send video and photo content to a larger screen, but it only works in conjunction with the included Nemo media player. This means you can't display Web pages, PowerPoint presentations or content from other apps on an external display.

Another feature shared with the Motorola XT720 is the ability to record video at a resolution of 720p. The quality of recorded video left us rather disappointed though. Video is shot at 24 frames a second, but our test footage looked very jerky. They are watchable, but it is not a very pleasant experience.

There are three physical playback buttons below the main screen that let you pause, play, rewind or fast forward video. The buttons also work for controlling music playback when you are using another application. It's a feature we're more used to seeing on feature phones than smartphones.

The Stream is good at video playback, supporting Xvid and DivX AVI files as well as MP4 video. Sound quality is good, but if you want to adjust the audio there's a Dolby Mobile equaliser with a range of separate settings for video and music playback.

Stills shot with the 5-megapixel camera look reasonably good, but we found the screen to be quite reflective which sometimes made framing shots outdoors a challenge. We were also disappointed to find that the camera doesn't have a flash and the range of settings isn't especially vast. Still, there is a macro mode, an anti-shake system, and you can set the white balance and ISO (between 100 and 800). Still shots looked average rather than outstanding, but are perfectly passable for everyday use.

For business users the presence of Android 2.1 means support for Microsoft Exchange. The phone can also pull in contacts from Facebook and, of course, from GMail. Business users may be intitially pleased by the presence of Documents to Go office suite app. However, the bundled version is limited to viewing Word, Excel, PowerPoint and PDF files. If you want to edit and create files, then you'll need to pay extra for an unlock code.

The Stream doesn't currently support remote wiping of your data in case you lose it while out and about. Several third party apps, including one from Symantec currently in beta, do provide remote wiping. Android 2.2 will have this ability built in, but Acer has yet to confirm when this update will become available to Stream users.

The on-screen qwerty keyboard is very good which is welcome news for heavy texters and email addicts. It is a little cramped when the handset is held vertically, but when held horizontally the large screen means the keys have plenty of space, and the capacitive touchscreen is very responsive.

Where the Stream will delight and frustrate in equal measure is Acer's custom Android interface. It has to be the most quirky approach we've ever seen.

The main screen is divided into two sections. The bottom third displays eight application shortcuts and, sitting above them, the Android notification bar - moved from its usual location at the top of the screen. This remains in place at all times, and you can customise the application shortcuts.

Sweep upwards and the full apps menu opens with these eight at the top and the remaining apps shortcuts ranged across two horizontally scrollable screens. Any more apps you add are appended to a new screen.

The upper two thirds of the screen can be swept left and right. On the left is a carousel of recently used apps. On the right there is a carousel of media files offering access selectively to music, photos and video when you tap the appropriate icon. The central screen just shows the time and date.

Where, then, are the usual multiple screens of Android widgets? These are found on a separate set of five screens which are accessible when you switch the handset on or double tap the on/off switch on the left edge of the casing. Think of them as being accessible from what we would normally consider to be the lock screen.

You can swipe through five separate screens of shortcuts, and get back to the main screen by pulling at a tab on the bottom left corner of any of the five screens. Adding widgets requires a long press on the Home button when you are back on the main screen.

Acer's interface does work, but it is fiddly. We'd have preferred a more conventional approach to widgets, while still allowing Acer to retain its innovative recently used apps and media carousel screens.

Memory support is fairly generous for an Android phone with 2GB of on board storage and an 8GB microSD card. The card fits into a slot near the battery, which you have to remove to swap cards.

Battery life suffers because of the large screen and fast processor, and we found a daily charge was needed. That is not unusual for a high end Android smartphone, but the Stream is definitely on the power-hungry side, and you may find a midday recharge is needed if you are a heavy media, Wi-Fi, GPS or 3G data user.

The Acer Stream is a feature packed smartphone, but its custom user interface won’t appeal to all and its battery life can be disappointingly short. If you want an Android phone, we'd rather have a Samsung Galaxy S which doesn't have some of the Stream's features but can have noticeably longer battery life.