The Samsung P580 laptop has a powerful graphics card and feels well-built, but should you buy it? Read our review to find out. 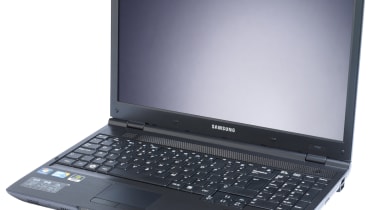 Most of Samsung's laptops have been aimed at consumers, but the P580, the Korean giant's latest model, is aimed at business users. It has a rather chunky, plain black appearance compared to the glitzier designs of the company's consumer laptops. This isn't necessarily a bad thing though as it feels more robust and the lid has a nice velvety texture.

Although Windows 7 Professional is pre-installed on the smaller-than-expected 320GB hard disk, a Windows XP downgrade disc is included in the box. We don't see the point of this though, as 7 Professional has an XP virtualisation mode for running older applications anyway. There's a serial port for connecting older peripherals and a socket for connecting a port replicator, which costs an extra 95 but does have extra ports such as a PS/2 connector for older mice and keyboards. There aren't any specialised security features though, such as a fingerprint or smart card reader.

One feature which everyone will appreciate is the good-quality 15.6in screen. It has a matte finish, so it doesn't reflect light from overhead fluorescent office lighting strips as easily as screens with a glossy finish. This means a reduction in glare, which can be very distracting, caused by the reflected light. Unlike some matte screens we've seen, this one is reasonably bright with minimal graininess. Colour accuracy and contrast are reasonably good with respectably wide viewing angles, so giving quick presentations from your laptop won't be a neck-straining experience for your audience.

Unusually for a business laptop, there's a powerful GeForce GT 330M graphics chip which is actually capable of playing the latest games. This may seem out of place, but it can be put to use accelerating applications that can take advantage of a powerful GPU, such as the latest version of Photoshop. These applications aren't common, but are slowly increasing in number. The Core i3 330M processor and 3GB of RAM scored 74 overall in our benchmarks. This is reasonably fast, but you can get laptops from competing manufacturers equipped with 4GB of RAM and a faster Core i5 chip for less money.

As we'd expect from a Samsung laptop, the keyboard is large, comfortable and responsive. There's also a numeric keypad with no misplaced or undersized keys for fast data entry in applications such as Excel. The touchpad is large and accurate, while the buttons feel reasonably responsive.

Battery life was ordinary at three hours and 20 minutes - we've seen cheaper 15in laptops last longer, although not with such quick graphics cards. A series of LEDs on the base allows you check the battery's charge without booting into Windows, which is a convenient extra.

There are four USB ports, one of which doubles as an eSATA port for connecting fast external hard disks. Another can be used to charge smartphones and MP3 players, even when the P580 is shut down. Two of the ports are located right next to the DVD drive; a chunky USB drive could potentially obstruct the tray.

The included one year warranty doesn't provide for onsite service, which is a disappointing. It's possible to extend this warranty by an extra one or two years for 69 and 115 respectively, but this only provides collect and return service. If you want onsite service, you'll have to pay even more. A one year onsite extended warranty costs 81, two years costs 163 and three years costs 257. This may seem pricy, but it's in line with extended warranty prices from other manufacturers.

With a great screen, keyboard and touchpad, plus the excellent build quality, the Samsung P580 has plenty going for it. Its fast 3D performance is notable, too, but unless this is a priority, it's hard to justify the high cost compared to similar but cheaper models that are quicker in Windows and have longer-lasting batteries. If you can find it cheaper, though, it's a good buy.