The latest 15in ThinkPad looks stylish for a Lenovo laptop. Read our full review to find out if the ThinkPad Edge has the processing power, comfort and battery life to match its pretty face. 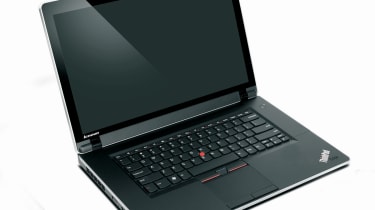 Like the rest of Lenovo's ThinkPad range of laptops, the ThinkPad Edge is aimed at businesses, but more specifically at small firms that don't have dedicated IT departments. Neverthless, you'd be forgiven for thinking otherwise. While other ThinkPads have the same retro, boxy appearance, the Edge has a slightly more stylish look thanks to its rounded edges, blinking red sleep indicator light and a lid that's available in either plain black or bright, glossy red. While the chunky base feels reassuringly robust, the lid flexes quite a lot under pressure.

As we've come to expect from a ThinkPad, the Edge's large keyboard is comfortable to use, although it doesn't feel quite as responsive as previous models - we'd prefer keys with a little more resistance. Oddly, the page up and page down keys are smaller and feel stiffer than the other keys. The Fn key takes the Ctrl key's usual place, which may trip up frequent users of keyboard shortcuts.

The touchpad is large and accurate. As an alterative, there's also a touchstick which has long been a standard feature on ThinkPads. The Edge's touchstick feels more jittery than on other ThinkPads, though. It has its own set of buttons, but neither set gave enough feedback when pressed. There aren't any dedicated security features, such as a fingerprint or smart card reader, but this isn't entirely surprising given the intended market for the Edge.

The 15.6in widescreen display has a resolution of 1,366x768 pixels and a matte finish which helps reduce glare caused by reflections from overhead light sources, such as fluorescent lighting strips in offices. Unfortunately, the backlight isn't particularly bright and viewing angles are quite tight, so you need to sit square on for the best contrast and accurate-looking colours. This won't be a problem when you're working alone, but could be inconvenient if you need to share something onscreen with someone else, such as during a presentation without the aid of a projector. At least the backlight is even and the screen tilts back so it lies parallel to the keyboard, making it comfortable to use on your lap.

The Core i5 430M processor and 4GB of memory fared well in our benchmarks, managing an overall score of 81. It's not the fastest i5-equipped laptop we've seen, but it's still up to most tasks. The battery lasted just under four and a half hours, which is one of the longer times we've seen for a 15in laptop.

We were a little disappointed to see a 320GB hard disk instead of a larger 500GB model. There are four USB2 ports, one of which doubles as an eSATA port for connecting fast external storage, although USB3 support would've been even better. There's also an ExpressCard/34 slot, increasingly uncommon on laptops from other manufacturers, for adding upgrades such as a 3G modem or USB3 ports.

Disappointingly for a business laptop, the warranty lasts only a year and doesn't provide on-site service you have to take it to your nearest Lenovo dealer. It's not even possible to buy onsite service as part of an extended warranty. The Edge isn't compatible with the many docking stations available for other ThinkPads, but it does have the same charging connector, which will be a relief if you already have an existing stash of spare power adapters.

We were a little disappointed by the ThinkPad Edge's smallish hard disk and poor-quality screen and it's missing some of the features many have come to expect from a ThinkPad. However, it does have good battery life, fast performance and a comfortable keyboard all at a surprisingly low price. It's not without its flaws, but it is a good value laptop.