The latest BlackBerry is here. However, without the as-yet-unreleased OS 6, should anyone but serious email addicts even consider it? Read on for our verdict. 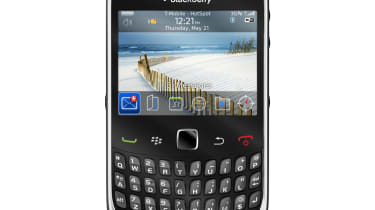 The BlackBerry Curve 3G is an attempt by Research In Motion (RIM) to pitch its smartphone line at first time users, or those who simply don't want a huge number of bells and whistles but who do want dependable mobile email service.

The features won't blow you away, and nor will the display, but for mobile email the BlackBerry Curve 3G is as dependably good as ever.

The now very familiar physical design has the screen sitting above the keyboard. The Back and BlackBerry Menu keys are flanked by the Call and End keys. These all sit flush with the black bezel and give a reassuring click when pressed. Right in the centre is the now familiar optical touchpad. It is small, but works very well at navigating the onscreen interface which is just as well as the screen isn't touch sensitive.

Beneath these buttons is the all important mini qwerty keyboard. We think RIM makes the best miniature qwerty keyboards to be found, though Nokia gives RIM a run for its money with its E72.

In this case the keys are pinched into a pretty narrow chassis that is just 60mm wide. The keys don't feel quite as responsive as they do on previous BlackBerry keyboards, so we were slightly hesitant with typing as a result until we got used to the general feel. People with smaller hands are likely to find it more comfortable to use than those with larger hands.

The edges of the BlackBerry Curve 3G benefit from RIM's now familiar rubberised grip. This makes it comfy to hold in one hand and less likely it will drop out of your hand onto the floor when used on a jolting bus or train.

There are two customisable buttons on left and right of the chassis, a volume rocker on the right hand side, and a microUSB connector on the left. The 3.5mm headset connector is also on the left edge of the chassis, but this is prone to snagging in the pocket and therefore far from ideal.

The top edge is really where the headset connector should be, but in this case the top edge is occupied by three keys for controlling media playback. Pressing the central pause/play button opens the media applications folder for video, music, pictures, ringtones, voice notes library and the voice notes recorder. This is convenient, but the headset connector should really be here too.

There's just 256MB of internal storage, which won't be enough if you also want to use the Curve for enjoying media and apps. Of course, you can use a microSD card to add more storage. The slot is under the battery cover and accessible without removing the battery. As expected, there's Bluetooth, GPS and 3G. There's also support for 802.11 b, g and n wireless networks.

RIM has yet to confirm when the update will be available, whether it will cost extra and how users will obtain the update. The company has also yet to comment on whether there will be any delay in the availability of the update for Curves bought on a contract from a network rather than SIM-free, as is often the case for Android phones and new versions of the Android OS. These aren't academic questions as OS 6 is a much needed upgrade, with new features such as a dramatically improved web browser.

The screen is rather disappointing. It's a bit small at just 2.4 inches across the diagonal, and it has a decidedly dated and cramped resolution of just 320 x 240 pixels. This simply isn't enough for activities like streaming media and web browsing. It's not as clear or as sharp as the displays we are used to seeing in higher end smartphones either. If you're new to smartphones, then you might not notice, but if you are considering switching from another smartphone the screen could be a reason to think twice.

Another disappointment is the camera. At just two megapixels and with no flash it is, on paper, very much an entry level specification. Not surprisingly, photos in general are lacking in definition and crispness and indoor shots look very disappointing. The camera is OK for very casual use, but it is a definite low point. Video fares even worse with the highest shooting resolution at just 360 x 240.

Voice call quality was superb, but battery life was more of a mixed bag. With a smallish screen to power, the 1150mAh battery actually managed to deliver more than a day's battery life in our informal tests, as long as we stuck to mobile email and voice calls. Push the GPS, Wi-Fi, web browsing or music playback and a battery fully charged in the morning will probably need a recharge by the afternoon.

The BlackBerry Curve 3G isn't anything we haven't seen before. As expected, it's great for mobile email, but without version 6 of the BlackBerry operating system, it falls down when it comes to web browsing. Nor were we impressed either by the poor quality screen and camera.

The Curve 3G will appeal to already committed BlackBerry owners and first-time smartphone buyers on a budget, both of whom will appreciate the handset's low price on contract. However, existing BlackBerry owners with more money to spend will probably be better off waiting for the touchscreen Torch and there's little here to tempt existing owners of other smartphones.

Browse all of the new mobile phones online at www.phones4u.co.uk

RIM’s new BlackBerry Curve 3G is likely to find its greatest appeal among budget-conscious newcomers to the smartphone world rather than existing smartphone veterans. It delivers mobile email as efficiently as ever. Unfortunately, its two megapixel camera is mediocre, the small screen has a low resolution, and even the keyboard design isn't quite up to RIM’s usual high standards.