QNap’s latest 8-bay NAS appliance is designed to fit in your rack cabinet and has a host of useful storage features. In this review we see how well it performs and whether it's good value or not. 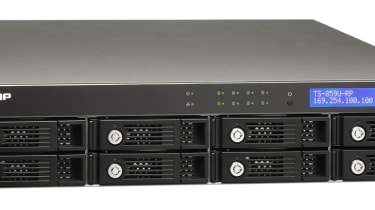 Small to medium businesses (SMBs) may be spoilt for choice with NAS appliances, but the majority of vendors have focused almost exclusively on models designed to sit on a desktop. QNap has a huge portfolio ranging from dual-drive right up to eight-bay boxes, but the latest TS-859U-RP Turbo NAS movies designed to fit into a rack cabinet.

The 2U rack chassis has eight hot-swap SATA drive bays and a pair of hot-plug power supplies. It's priced very competitively with a diskless model at LambdaTek available for 1,236 ex VAT and a 16TB version from the same retailer for around two grand.

QNap has moved away from Core 2 Duo processors over to low-power Atoms in its NAS devices and the TS-859U-RP is no exception with its dual-core 1.6GHz Atom D510. This is paired with 1GB of DDR2 memory, while the Linux kernel resides on a 512MB disk on module.

Businesses looking for a reliable NAS appliance need more hardware redundancy features than just dual power supplies though. Fortunately, RAID options are particularly good as there's support for all key array types including RAID-6. Using RAID 6 does mean less useable storage space, but it can handle simultaneous failures of two drives. This is especially useful when a single drive has failed and the appliance is in the process of rebuilding the array on a new drive. If another drive failure occurs during this phase you're safe, but if it had been a RAID-5 array you'd be in deep trouble.

One area where QNap comes up short is storage expansion as you can't daisy-chain more QNap appliances off the back of the main unit. However, it does have a pair of eSATA ports so you can add more standard external drives if needed.

The appliance has another expansion trick up its sleeve in the shape of the virtual disk feature. You create iSCSI targets on another QNap appliance, or other IP SAN storage servers, and effectively hand them over to the main unit which can support a maximum of eight targets.

We tested this using a QNap TS-439 Pro appliance with a 500GB target. From the TS-859's web interface, we entered the IP address of this unit and it discovered the target ready for action. Once formatted, the virtual disk could be used as a location for creating new network shared folders with access managed entirely from the master appliance.

For general testing we fitted four 1TB WD GreenPower drives and used the appliance's LCD control panel to build a RAID-6 array. This took over seven hours to complete and during this time we were unable to use the volume.

QNap's Finder utility locates the appliance on the network and gives quick access to its AJAX-based web interface, which is very well designed. The management interface provides a side menu listing all features and selecting one provides all its details in the main window to the right of the menu.

It's easy to create network shares and decide whether Windows, Linux, Unix and Mac clients can use them. Access controls extend to the appliance's local user and group database or you can tie in with AD domain authentication.

IP SAN performance was also good with the Iometer utility reporting a high raw read throughput of 104MB/s for a 50GB target. The virtual disk feature wasn't as impressive. Copying the video clip to and from a 500GB remote network share on the TS-439 test appliance returned much lower read and write speeds of 35MB/s and 21.5MB/s.

Power consumption is quite modest as we measured a draw of 70W with the four-disk RAID-6 array under load. With the drives in standby mode this dropped to only 48W. With both power supplies installed, you should enable the redundant power mode in the web interface as this will cause an audible alarm to sound if a supply fails.

There's a veritable feast of extra features, although many of them are aimed more at consumers. These include iTunes and UPnP media servers, as well as the Multimedia Station for publishing photos, videos and music in web galleries. Potentially more useful is the ability to host your own web sites and the ability to access stored files remotely using either secure FTP or a web interface.

Workstation backup is handled by the distinctly dated but functional NetBak Replicator program which runs scheduled backups of selected files and folders to the appliance. Scheduled block level replication to other QNap appliances is also available, as are managed backups of local folders to attached USB and eSATA devices.

For the price, the TS-859U-RP can't be faulted for features as it has them in abundance. We're not convinced businesses will find a use for them all, particularly the multimedia functions, but it's very easy to use and overall performance is very good.

QNap’s new rack mount NAS appliance is great value with plenty of fault tolerance. There's support for IP SANs plus plenty of backup tools and the Atom processor is more than fast enough. You can’t expand storage by hanging more QNap appliances off the back, but the virtual disk feature does provide an unusual, albeit underperforming, alternative.