We review the latest smartphone from Motorola. Is it good enough to stand out from other Android phones? 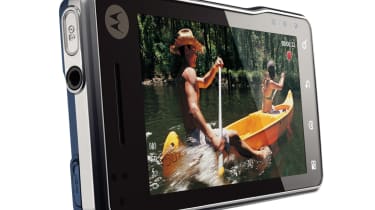 The Motorola Milestone XT720 has some of the most impressive-sounding specifications of any Android smartphone currently available.

It has an eight-megapixel camera with Xenon flash, a large, high resolution screen, the ability to shoot 720p video, and an HDMI port for showing video and photos on an external display. The phone supports HSDPA download speeds up 10.2Mbps and upload speeds up to 5.76Mbps, as well as the usual Wi-Fi and GPS. Android 2.1 is installed so business users have the benefit of Microsoft Exchange support for email, calendars and contacts.

The only gaps in its specifications department are the 550MHz processor other top end smartphones have faster 1GHz processors and the lack of 802.11n support for WiFi.

Neither of these omissions bothered us during use. A more important limitation is the quality of the eight-megapixel camera, which did not live up to our expectations.

The camera has a fair few settings on hand including a multi-shot mode, face detection, a macro mode and touch focus so you can touch the screen to make the camera to focus on what you want it to. There's no significant shutter lag either.

Stills look reasonably good, but they didn't look significantly better than images taken on smartphones with five-megapixel cameras. The Xenon flash does a better job than the more common LED flash units of illuminating close-up subjects indoors. However, like all flashes, its efficacy diminishes the further away from the subject you are.

The 720p video shooting is peppered with pauses while data is processed. We found these pauses replicated in saved video, which makes viewing recorded clips an unpleasant and unsatisfactory experience.

Unlike the original Milestone, the XT720 doesn't have a slide-out physical keyboard. We weren't fond of the original Milestone's stiff, unresponsive keys, so we won't miss it. This does mean you'll have to rely on the onscreen touch keyboard, but thankfully it feels responsive and works well, especially when the screen is oriented horizontally as makes the keyboard bigger.

An alternative to the onscreen keyboard is Android's built-in speech recognition. We found it to be very good indeed at turning our spoken words into text for SMS or emails. There's a microphone icon on the keyboard and you just tap this to start the speech recognition engine. This speech recognition feature does require an internet connection though, since it relies on Google's servers to process your dictation into text.

The handset itself is very well made. The backplate is made of reassuringly solid metal coloured in a rather attractive shade of blue. The metal helps account for the 160g of weight that makes the Motorola Milestone XT720 noticeably heavier than other smartphones, but it is actually slightly lighter than the original Milestone.

The shiny front picks up fingerprints easily. There are four touch sensitive buttons beneath the screen for Home, Menu, Back and Search functions. A very peculiar design quirk of the chassis is that the bottom right edge bulges outwards making the Motorola Milestone XT720 wider at this point than elsewhere. We don't have any strong feelings about this bulge either way, but it might be enough to stop those with smaller hands reaching all the way across the screen when working one-handed.

On the edge at this point are the camera shortcut button and a button which cycles you through the media gallery, stills shooting and video shooting modes. Tiny icons light up to remind you which shooting mode you are in, as if the live on-screen preview wasn't enough.

At 3.7-inches the screen itself is relatively large for a smartphone. It has a resolution of 480x854 pixels which, although not quite as large as the iPhone 4's 960x640 pixels, is quite high. If we have a complaint it is that it is a bit tricky to see well outside in sunshine. This isn't unique to the XT720, but it could prove annoying.

Nonetheless, the bright screen is great for watching video. The high resolution is ideal for web browsing, since you can see more of the page at once, always a big plus. It's easy to zoom in and out of webpages using a pinching gesture since the capacitive touchscreen supports multitouch.

Unlike its previous Android phones, Motorola has chosen not to graft its own customised interface onto the XT720's Android 2.1 installation. This should mean that it can be upgraded easily to newer OS versions, including Android 2.2. However, although Motorola has confirmed that the Asian version of the XT720, the Motoroi, will receive the 2.2 update later this year, it has yet to confirm European availability.

Motorola has added a couple of useful apps including a version of the QuickOffice office suite is included, but it can only view and edit documents. Fortunately, the full version is available for just 6.49. Installed on the included 8GB microSD card is the Motonav GPS app. It's only a demo version though.

Another extra for car owners is the Moto Car Home app which gives you an alternative home screen for in car use. It divides the screen into six huge and easily tappable buttons Home, Bluetooth, View map, Voice search, Music and Contacts.

MySign is an app which lets you start other applications by drawing a symbol on the screen. As a shortcut it is a great idea, but it doesn't run invisibly in the background so you need to run the app in order to access its capabilities and not all apps work with it, so its usefulness is limited.

Call quality was fine, but battery life falls a little short. Depending on how heavily you use high end features, such as GPS and Wi-Fi, you may or may not get a full day from the Motorola Milestone XT720 between charges.

Entertainment features include an integrated FM radio, a music equaliser and support for H264, WMV and MPEG4 video files. The microHDMI port allows videos and photos to be displayed on an external screen. A microHDMI cable is included in the box. Unfortunately, but not unexpectedly, this feature only works with the bundled media player app.

You may be drawn to the Motorola Milestone XT720 by its high end flagship features such as the eight-megapixel camera, Xenon flash and 720p video recording, as well as its large screen and quirky physical design. Unfortunately, the camera isn't much of an improvement over other smartphone cameras. This leaves little reason to choose the XT720 over other smartphones, including other, very similar Android models.

The Motorola Milestone XT720 is, on paper, an impressive phone with its eight-megapixel camera, 720p video recording, Xenon flash and large, high resolution screen. Unfortunately, the screen doesn't fare well under bright sunlight, while the camera didn't impress us with the quality of its photos and recorded video. There are plenty of other things to like about the XT720, including the large, high resolution screen which is great for web browsing. Nonetheless, you should take a look at other, similar, high end Android smartphones, such as the Samsung Galaxy S, before taking the plunge.