BT has had one of its well-known TV storyline ads banned by the ASA for misleading claims over broadband speeds. 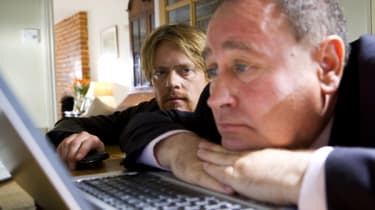 For the second time in a month the Advertising Standards Authority (ASA) has banned a BT broadband advert.

Early in August a BT infinity ad was prohibited from appearing again, and now a range of advertisements have been banned, including a TV commercial featuring Love Actually actor Kris Marshall.

Many will remember the ad, in which an estate agent using a standard ADSL connection is hampered by slow speeds at peak time, before a voice over proclaimed "BT is rolling out up to 20Mbps speeds to give you a consistently faster broadband throughout the day even at peak times."

To provide a comparison, the ad also featured a woman, the partner of Marshall's character, using the web and getting faster speeds.

Others believed surfing a typical website would not be any faster with a 20Mbps connection than it would with an 8Mbps service something the ASA also agreed with.

"Because we had not seen sufficient evidence to support the claim that BTs new broadband service was consistently faster than its existing 8Mbps service even at peak times, we concluded that the ad was likely to mislead," the ASA said.

Three viewers also took umbrage with the speed of the woman's connection, which they said appeared faster than what could be achieved at any connection speed.

"Although we noted BT's argument that the sequence was not intended as an actual visual comparison we considered that, in an ad focused on the benefits of a faster service, consumers would expect any comparative demonstration of that feature to be representative of the benefits available to them," the ASA ruled.

BT provided a raft of data in an attempt to prove its 20Mbps services were genuinely faster than the 8Mbps option.

The telecoms giant said the TV ad was "merely a means of visualising a typical frustrating moment that viewers could relate to."