The latest Toshiba Portégé laptop weighs less than 1.5kg, yet it has a powerful Core i5 processor and an integrated DVD writer. Read our review to see if it's as good as it sounds, or if there's a catch. 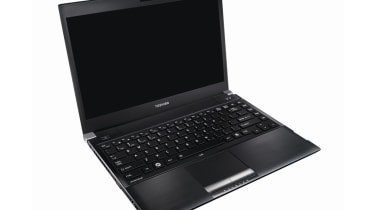 Most ultra-portable laptops tend to sacrifice performance and features to save on weight and maximise battery life. On paper, the latest model from Toshiba appears to have avoided making any significant trade-offs. It weighs under 1.5kg, yet it has a powerful Core i5 processor and an integrated DVD writer. However, there are still certain disadvantages one should be aware of before purchasing.

The R700 looks very sleek and slender thanks to its black, brushed metal appearance. The base feels rigid and sturdy, but the lid flexes under pressure very easily which doesn't inspire confidence. Although the R700 weighs just 1.44kg, so it's easy to carry around all day, yet it has a built-in DVD writer which is an unexpected and welcome bonus.

An annoyance is the almost constantly audible cooling fan. It's not loud enough to be intrusive, but it is noticeable in a quiet room. Despite this, the underside of the R700 can become very warm but at least it's not as uncomfortably hot as previous Portg ultra-portable laptops we've seen.

These noise and heat issues are almost certainly due to the powerful Intel Core i5 520M processors Toshiba has managed to squeeze into the R700. We'd expect most ultra-portable laptops at this weight to use low-voltage or ultra low-voltage processors, as the Pentium U5400 or the Core i3 330UM, instead of a regular voltage chip such as the 520M.

The upside is that the R700 sped through our demanding Windows benchmarks, scoring 87 overall. It did especially well in our video encoding and image editing tests, but it fell behind running multiple applications simultaneously. We suspect this is due to the 2GB of RAM, which is a rather meager amount at this price. Multitasking benefits from ample memory.

We'd expect such a powerful laptop to have short battery life, but the R700 lasted nearly eight hours in our light usage test, where it scrolls through several long web pages until the battery runs out. Eight hours is more than long enough to last a transatlantic flight. In our more demanding heavy usage test, where it continuously edits a series of images until the battery depletes, the R700 lasted just under two and a half hours. This isn't as impressive, but it's to be expected given the powerful processor.

Fast performance and long battery life is of little use if the keyboard and touchpad are too uncomfortable to use. Here, the R700 is a mixed bag. The touchpad is large and accurate, but the small, shiny buttons have a slippery texture which makes them a little tricky to press. The keyboard is designed with lots of space in between the keys. Compared to previous Portg keyboards, the R700's keys feel a little too stiff so they don't give enough feedback when pressed. They still feel comfortable to type on, but can take some getting used to, especially if you're used to desktop keyboards and previous Portgs. This is a shame given the near-perfect design of previous Portg keyboards which had just the right amount of feedback, resistance and travel.

A fingerprint reader is nestled in between the two touchpad buttons. It works well and can be used instead of a password for logging in. Another alternative to using a login password is to use the webcam with Toshiba's bundled facial recognition software. This worked surprisingly well in our tests. It successfully recognised this writer's face both with and without a pair of glasses. Since the software requires the person logging in to shake and nod their head slowly so it captures every side of your face, it wasn't fooled by a photo of this writer's face.

The 13.3in screen has a matte finish, which doesn't reflect light from overhead lighting sources. This is a welcome feature, since glossy screens can be very reflective. These reflections can cause glare which looks very distracting. Other matte screens we've seen can look very grainy. This graininess often spoils the quality of on-screen images, but thankfully the R700 doesn't suffer from this problem.

Although the R700 has a dedicated connector for a port replicator, Toshiba is pushing its new range of port replicators which use a standard USB port instead. The R700 has three USB2 ports, one of which doubles as an eSATA port. Unsurprisingly, given the R700's slender frame, it doesn't have any ExpressCard slots or legacy ports, but these won't be missed unless you have specialist peripheral needs. We'd have preferred a bigger hard disk, but the included 320GB model should be big enough for most needs, such as storing lots of office documents.

The R700 comes with a three year warranty, but it only provides service if you take it to your nearest Toshiba dealer or customer service centre. Several extended warranties are available, providing either collect and return or onsite service. There's also the option of purchasing data recovery and insurance cover from Toshiba.

The Portégé R700 is a lightweight yet powerful laptop. It's not perfect though - the keyboard isn't to our taste and the heat and noise issues are irritating. Despite these issues, if you need fast performance without the bulk then the Portégé R700 is currently the best ultra-portable laptop available at this price.