DataViz Documents To Go Premium for iPad and iPhone review

Will DataViz's office suite for the iPad allow you to leave your laptop behind and still get some real work done? Read our review to find out. 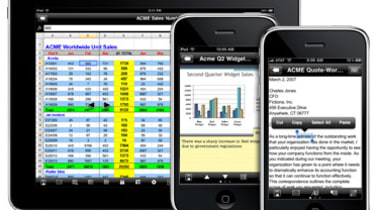 Apple may be promoting the iPad as an alternative to netbooks, but one advantage that netbooks have over Apple's tablet is the ability to run Microsoft Office. Although Apple has released a version of its iWork suite for the iPad, its file format compatibility is incomplete and moving files to and from the iPad is cumbersome. DataViz has released a version of its venerable Documents To Go suite for the iPad. While it's an improvement over iWork in many respects, it's a disappointment in others.

Files have to be copied onto the iPad before you can work with them. The standard method of using iTunes and a USB cable to shuttle files back and forth is cumbersome and inconvenient, especially since it makes no effort to synchronise any changes you make to documents. Like iWork, Documents To Go Premium (DTGP) can open office documents sent as email attachments. This works well and the Premium version, unlike the cheaper standard version of Documents To Go, can also access attachments in Exchange inboxes.

One distinct advantage DTGP has over iWork is that it can access files stashed away in online storage services, such as Dropbox, SugarSync and MobileMe iDisk. Files are automatically cached as you open them so they can be accessed offline. DTGP also works with Google Docs, but it must first download files before you can work on them. Although you can then upload the changed document, it could overwrite any changes made by other people which is obviously far from ideal when collaborating on a shared document.

Disappointingly, DTGP can't access files stored on standard file servers but it can synchronise its files with those stored on your Mac or PC over WiFi using a free companion application. Recently accessed files, whether stored online or locally, can be accessed from the app's main menu.

Although DataViz claims that external Bluetooth keyboard support is forthcoming in a future update, we didn't have any trouble using one with the current version at the time of writing. Even if you're quick and proficient at using the iPad's onscreen keyboard, using an external keyboard may still be preferable. When active, the onscreen keyboard leaves considerably less room for viewing your documents, especially when the iPad is oriented horizontally. The toolbar can be minimised to give a little more screen space.

The interface takes getting used to, especially if you're an experienced Microsoft Office user. Simple tasks such as selecting a range of cells in a spreadsheet are baffling until you've figured out the right gestures. This isn't helped by the incomplete documentation and the toolbar full of small, unlabelled, cryptic looking icons. Tool tips are available, but only if you press and hold each icon which grows tedious very quickly.

We weren't expecting DTGP to have 100% feature parity and file format compatibility with Microsoft Office and it doesn't. A more critical flaw is that DTGP can strip out content or formatting in a file if it depends on a feature the app doesn't support. For example, in a moderately complicated spreadsheet with several embedded macros and a graph dependent on external graphics assets, DTGP was able to open the file but stripped out the macros and the entire graph. This makes DTGP unsuitable for working on even moderately complex documents.

Although our complex PowerPoint presentations were opened correctly, the ability to create new presentations is rather limited and inferior to iWork's Keynote. There's no way to add images to new slides, while text editing options are basic and animation capabilities are non-existent. Creating new slides and editing existing ones is done using a separate editing mode which isn't WYSIWYG, so you have to constantly flip between editing and viewing modes which is awkward. It is possible to display slides and presenter notes on an external monitor or projector using Apple's VGA adapter, but we wish it was possible to show just the notes on the iPad and not on the external display.

DTGP does have some useful editing features though, most of which aren't present in iWork. Word processing documents have word count and support for Microsoft Word's Track Changes feature, both of which are gaping omissions in iWork's Pages. PDFs can be viewed, but unsurprisingly can't be edited. DTGP is also a Universal app, so it will also run on an iPhone or iPod Touch. The smaller screens on those devices makes editing and creating new documents even more cumbersome, but the app still has most of the same features as on the iPad. Your iPhone or iPod Touch will need to be running iOS 4 if you want the ability to open files sent as email attachments though.

Documents To Go Premium has lots of convenient ways of accessing your files, but file format compatibility is incomplete and potentially destructive while the interface can be cumbersome. For all but straightforward, simple documents, the app is better suited for viewing files rather than serious editing and document creation. DTGP on an iPad is not a complete substitute for a laptop with Office installed, but it could be a workable alternative in certain circumstances.