Gateway is moving back into the server market in a big way and has HP clearly in its sights. In this review we see if the new GR360 F1 has the muscle to take on the establishment. 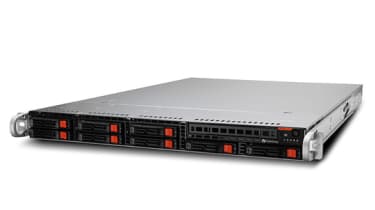 The GR360 can be easily upgraded to accommodate even more storage as the L-shaped motherboard accepts Gateway's Flex I/O cards. These allow some unusual expansion options as the cards plug directly into an interface slot at the bottom of the central riser. They sit flush with the motherboard so don't obstruct the riser's own PCI-E expansion slot above. There's also room for another PCI-e card on the other side, although it would have to be very short so as not to obstruct the processor's heatsink in front of it.

A good selection of Flex I/O cards are available. Along with two and four-port Gigabit Ethernet options, there's a SAS card which you'll need if you want to use all eight drive bays. This has eight SAS ports, adds support for RAID-6 arrays and comes with 256MB of embedded cache.

The GR360 is well built, apart from the push buttons on the lid were very uncooperative making it difficult to remove it without some screwdriver-related persuasion. Thankfully, the interior is tidy with good access to all key components.

The server supports Xeon 5500 and 5600 processors and a total of 18 DIMM slots means you can go up to 192GB using DDR3 memory modules. Cooling is looked after by a bank of six cold-swap fans in front. Although noise levels aren't overly intrusive, they are higher than that emitted by the DL360 .The GR360's four on-board Gigabit Ethernet ports beats HP for network connections, as it has twice as many embedded Gigabit ports as the DL360 G6.

It also matches it for power redundancy as it supports two hot-plug power supplies. We measured the server drawing 93W with Windows Server 2008 R2 in idle and 147W with SiSoft Sandra maxing out the eight logical processor cores. A DL360 G6 with an almost identical specification drew 100W and 157W respectively in the same power tests.