We review Samsung's latest netbook which has a staggering 10 hour battery life. 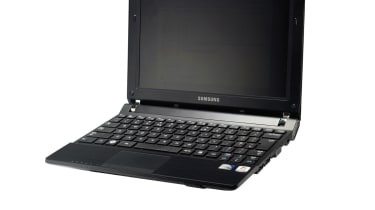 As much as we like netbooks, once you've bought one it's difficult to justify the purchase of another unless your existing model is lost, stolen, broke or fundamentally flawed in its design. The attraction of netbooks lie in their low cost and low weight. Their low price means they often don't use the latest technology, which is usually one of the main reasons to buy a new computer. However, if you are looking to replace an existing netbook or want to buy your first one then there's a lot to like about the N230.

A lot of netbooks look and feel cheap. Although the N230 isn't as robust as the ruggedised Dell Latitude 2110, it feels very well-made thanks to its firm base and reasonably rigid lid. It's eye-catching too thanks to its metal-effect wrist rest, glossy black lid and unusual-looking chrome hinge. The battery props up the keyboard at an angle, which some may find more comfortable. Despite this, the battery is still reasonably slender and is nowhere near as chunky or as obtrusive as the bulging batteries we've seen with other netbooks, such as the Latitude 2110.

The big battery justifies its presence. When scrolling through a series of web pages, it lasted just under 10 hours - one of the longest times we've seen on a netbook. Even when churning through a more demanding task, such as editing images, the battery still lasted an impressive seven hours and 17 minutes. It's long enough to last all but the most epic, globe-trotting journeys.

Despite its long battery life in our heavy usage image editing test, we wouldn't want to undertake demanding work on the N230 regularly since it is an Atom-powered netbook after all. The N450 processor and 1GB of RAM are only powerful enough for light office work and web browsing. The RAM slot is easily accessible, so adding another 1GB of memory to help make Windows more responsive is trivially easy.