We take a hands-on first look at ViewSonic's intriguing interactive projector which could make flipboards and blackboards a thing of the past. 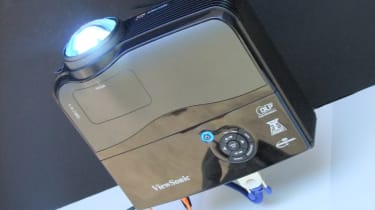 ViewSonic has announced the PJD-7383i, an interactive projector which the American displays company hopes will replace flipcharts and interactive whiteboards in offices and schools.

Using a special rechargeable pen which communicates with the projector wirelessly, we were able to draw and write directly onto the projected image of a PowerPoint slide as if we were using a mouse or graphics tablet directly connected to the computer. The changes are saved to the file being edited, in this case a PowerPoint presentation, and can be edited just like any other graphic.

The pen looks a bit chunky, but it's surprisingly light and is charged over USB. During our hands on at the IFA trade show in Berlin, there seemed to be a slight lag between using the pen and the image appearing onscreen, but we'll reserve judgement until we get our hands on a production unit.

Although extra pens will be available separately, only one pen can be used with a projector at any one time due to limitations in the Point Blank interactive technology from Texas Instruments. While it's currently unique to ViewSonic's projector, rival projector manufacturers could license it and release their own versions.

The PJD-7383i can display content in 3D, but the interactive and 3D capabilities can't be used simultaneously. To our eyes, the 3D effect wasn't as convincing as the best 3D TVs we've seen and will likely be of little use in most offices anyway. Unfortunately, switching between 3D and interactive modes is a fiddly process that requires digging through the onscreen menus using the remote. A shortcut button would be a big help.

The PJD-7383i is a DLP projector with a resolution of 1,024x768 pixels, so it's definitely aimed at businesses and not consumers who want to watch high definition movies. It's a short throw model, so you don't need a large amount of space between the projector and your wall or screen to display an image, which will please businesses with cramped meeting rooms. It has a rated brightness of 3000 lumens and a stated contrast ratio of 3000:1.

The PJD-7383i is due to be released in September, but suggested UK retail pricing has yet to be confirmed. ViewSonic plans to sell it for less than an interactive whiteboard. We'll bring you a full review as soon as we can.

The company is already planning a successor, the the PJD-7583wi, for release in November. It will have a higher resolution of 1,280x800 pixels, as well as a USB port. These can be used to display content stored on a USB flash drive, so presentations could be given without a laptop. Alternatively, a laptop could be connected to the projector over USB or ethernet, although we don't see the point of this unless your laptop's standard monitor connections are broken.

The ViewSonic PJD-7383i interactive projector is certainly intriguing, but we'll have to wait for pricing and a more in-depth hands-on review before we can decide whether it's a must-have or a clever gimmick.