Toshiba adds to its growing range of tablet computers with the Android-based Folio 100. We take a hands-on first look. 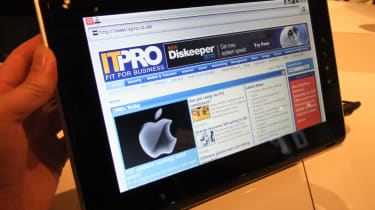 Toshiba has announced its new Android tablet, the Folio 100, and we were able to get our hands on one at the IFA trade show and press conference in Berlin.

Other companies have already announced their own Android tablets, but the Folio 100 is the first we've seen to use the Nvidia Tegra 2 processor. This means it should be capable of playing HD video smoothly on its 10.1in screen. This may seem a little pointless on 1,024x600 pixel screen, but there's a full-size HDMI port, so 1080p HD video could be displayed on an external display or projector. Even if you're not interested in HD, the Tegra processor should be more than fast enough to handle other demanding tasks and apps.

During our brief hands-on, we were impressed with the smooth and responsive interface but were surprised to discover that it doesn't support multitouch gestures, such as pinching to zoom in and out of webpages and images. Android 2.2 is pre-installed, but there's a custom interface on top that will look familiar to users of recent Toshiba laptops. A scrollable dock of shortcut icons runs along the bottom of the screen and is divided into tabs for apps, widgets and web bookmarks.

Unlike the Apple iPad, there's a 1.3 megapixel webcam built-in which could be used for video conferencing. Unfortunately, Toshiba hasn't designed its own video conferencing app, such as Apple's FaceTime feature on the iPhone 4, so you'll have to rely on a third-party app downloaded from the Android Market. We weren't fond of the customised onscreen keyboard the keys were smaller than we'd like which made typing difficult, but it may be possible to get used to this.

We were surprised by the Folio's creaky build quality, but hopefully finished production models will feel sturdier. There's 16GB of built-in storage, with a full-size SD card slot for adding more. 3G, Bluetooth and wireless N networking are all built-in. There are also two USB ports, one for connecting to a PC and for charging, the other for importing content from other devices such as a camera.

Toshiba has yet confirm UK pricing and availability, but it plans to make it available for 399 euros later this year in Europe.

We find it a little odd that Toshiba is using Android on the Folio 100, while using Windows 7 on the Libretto W100. Nevertheless, the Folio could be very promising if app developers take advantage of its features, such as the Tegra processor and the HDMI and USB ports.