We take an in-depth hands-on first look of the Samsung Galaxy Tab – the most promising Android tablet yet. 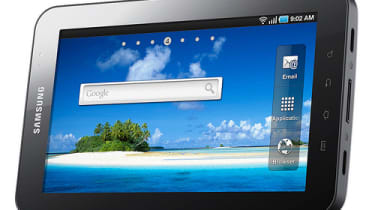 The release of the Apple iPad has been followed by the announcement of countless tablet computers, most running Android, from several other manufacturers. While some look like nothing more than slavish iPad imitators, the Samsung Galaxy Tab stands apart and is the most promising Android tablet we've seen yet.

We managed to get ahold of one at the IFA electronics show in Berlin and were immediately struck by how small and light it is, especially when compared to an iPad. At 380g it's around half the weight of Apple's tablet so it's much easier to hold for extended periods of time. Although it's made of glossy black and white plastic, instead of glass and aluminium like the iPad, it feels very sturdy and well made.

We were dazzled by the brightness of the 7in screen, especially when we learned that it's a standard TFT screen rather than the AMOLED screens used by other Samsung products, such as the Galaxy S smartphone. Colours still look rich and vivid, but the glossy finish is very reflective though and also picks up fingerprint smudges very easily. We were concerned that the 1,024x600 pixel resolution on such a compact screen might make text look too small to be legible, but from our brief experience this wasn't a problem.

The sharp-looking screen comes into its own for reading books and newspapers. There's not one, but two ebook reader apps, one from Samsung and the other from Kobo. Both bear an uncanny resemblance to Apple's iBooks app on the iPad, down to the virtual bookshelf and animated page turns. Oddly, only the Kobo app has a built-in app for buying ebooks.

There's also a dedicated app for buying and reading newspapers, such as The Guardian. The page layouts look like scanned copies of actual newspaper pages. This means the onscreen page layouts are attractive, but useful options such as searching by keyword didn't seem to be present. Although newspapers seemed to be available from a vast number of countries, for most people we don't see the advantage of using this app over an RSS feed reader or the web browser.

Android 2.2 is preinstalled on the Tab, so there should be Flash and Exchange support but we weren't able to try these out during our brief hands-on. Multitouch gestures are supported, such as pinching to zoom in and out of webpages. Only a light touch was required for our prods and jabs to be recognised, but it still doesn't feel quite as smooth and responsive as the iPad but it's not far off at all. Samsung's customised iPhone-like Android inteface, familiar to Galaxy S owners, is present too.

3G is built in alongside Bluetooth 3.0 and 802.11n wireless networking. Surprisingly, the Tab can used as a phone. The broad width of the Tab, due to the 7in screen, makes holding it up to your ear feel particularly silly. Even if you use a Bluetooth headset for holding conversations, we just can't see many people using the Tab instead of a slim and light smartphone for regular phone use.

There's a forward facing camera for video conferencing, but there wasn't a pre-installed app capable of taking advantage of it as far as we could determine. A three megapixel camera with flash is built into the back of the Tab. Numerous settings, included ISO levels and scene presets, were available. We didn't have time to try it out in different lighting circumstances, but we were surprised to find quite a lot of noise in images taken indoors under fluorescent lights. Hopefully it was just a quirk in the pre-production unit we saw.

16GB and 32GB versions of the Tab will be available. The microSD slot allows up to 32GB of extra storage to be added, but we were a little disappointed that Samsung didn't take the opportunity to support the latest microSDXC cards which can be even larger.

The Galaxy Tab will be launched in Europe from October onwards, but Samsung representatives were unable to confirm specific UK availability dates to ongoing negotiations with the mobile phone networks. In the UK at least, Samsung expects most Galaxy Tabs to be subsidised by the networks and sold with a 3G contract.

The Galaxy Tab is the strongest Android alternative to an the iPad that we've seen so far. Samsung already has plans for Tabs with different screen sizes. What sizes will eventually be released will depend, we suspect, on how popular this 7in model is and how other manufacturers, including Apple, respond to it.

The Samsung Galaxy Tab is, for the most part, not just another iPad-wannabe. It's the first non-Apple tablet that we're genuinely intrigued and excited by thanks to its superb build quality, high quality screen and interesting bundled apps.