We take a look at ViewSonic's intriguing dual-boot Android and Windows 7 ViewPad 100 tablet, as well as the smaller ViewPad 7. 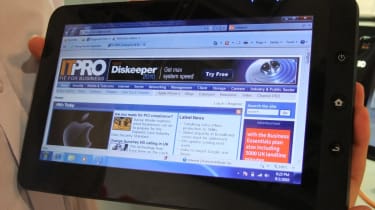 ViewSonic may be better known for its range of monitors and projectors, but the company has been making computers for a while now. We take a look at ViewSonic's two new Android tablets and were pleasantly surprised by their sophistication.

ViewSonic has announced two Android tablets, a 7in model and a 10in model. Although larger and heavier, the 1,024x600 pixel 10in model is arguably the more interesting one since it can run both Android and Windows 7. It can do this since it's equipped with 1GB of RAM and a a 1.66GHz single-core Intel Atom N455 processor. The ability to run both standard Windows applications and mobile Android applications makes the ViewPad 100 arguably more compelling for businesses than other Android tablets and perhaps even the iPad.

Switching between the two different operating systems requires restarting and selecting your desired operating system from a rather spartan boot menu. ViewSonic is planning on a slicker, more visually appealing method of switching between the two applications. It's important to point out that you run either Windows 7 or Android not both simultaneously.

Oddly, the version of Android installed on the ViewPad 100 is 1.6 rather than the latest 2.2. According to Product Marketing Manager Derek Wright, this is due to the fact that 1.6 is currently the most recent Atom-compatible version of Android. We suspect it may the last for a while, as Intel is probably more interested in promoting its own MeeGo smartphone operating system developed with help from Nokia.

Since the ViewPad 100's specifications are essentially identical to a netbook, it should run quite smoothly. Unfortunately, the problem lies with Windows' touchscreen interface which just isn't as responsive or accurate as Android. Windows' many fiddly menus and controls aren't finger friendly either and the accelerometer felt sluggish to respond to. We're also concerned that having two operating systems leaves little room on the 16GB of internal storage for apps and files, but there is a microSD card slot for adding more storage.

The touchscreen and accelerometer are dramatically more usable under Android instead of Windows 7. Although it didn't feel as accurate or as responsive as the Apple iPad or the Samsung Galaxy Tab, it didn't feel frustrating to use in our brief hands-on experience.

The ViewPad 100 feels sturdy and well-made, although we suspect the brushed metal back is actually plastic. At 835g, it's close in weight to an iPad so it might not be too comfortable to hold single handed for extended periods of time.

We like the idea of a dual-boot Android and Windows 7 tablet and so will, we suspect, many businesses. However, operating system issues from the immature touchscreen Windows interface to an outdated version of Android currently limit the ViewPad 100's appeal. ViewSonic plans to release the 10in tablet around October. Exact UK availablity and pricing has yet to be confirmed. Derek Wright estimates that it will cost around 500 euros, or just over 400, but this is subject to change.

Compared to the ViewPad 100, the ViewPad 7 is a more conventional tablet computer. It runs Android 2.2 and has a 7in screen with a resolution of 800x480 pixels. It also bears an uncanny resemblance to the iPhone 4 with its glossy black rear and metallic-like trim. Although it's actually made out of plastic rather than glass and metal like the iPhone 4, the model we saw felt remarkably sturdy and well-made. It weighs a light 375g.

Multitouch gestures are supported. Although the touchscreen didn't feel quite as accurate or as responsive as the iPad's, it's still very usable. This may be due to the fact that the ViewPad 7 is equipped with a 600MHz SnapDragon processor instead of the 1GHz processors commonly found on other tablets.

Whether this processor will be a serious limitation when running apps, such as video conferencing programs, remains to be seen. A front facing camera with a resolution of 640x480 pixels is built-in, but ViewSonic hasn't included an app of its own to take advantage of it for video calls. There's a rear facing three megapixel camera for taking snapshots and recording video.

Like the 5in Dell Streak and the 7in Galaxy Tab, the ViewPad 7 can also be used as a phone since it has 3G and a mic built-in. Like those other Android tablets, we just can't see many people choosing to use the ViewPad 7 for making phone calls regularly due to its wide impractical girth.

The ViewPad 7 will be available from this October. European pricing will be around 400 euros, or around 330. We were pleasantly surprised by the well-built ViewPad 7, but it faces stiff competition from the Samsung Galaxy Tab.

ViewSonic's Android tablets are an impressive first effort from the American displays company, but it will likely have a hard time competing against the Samsung Galaxy Tab and Apple iPad titans.