Samsung's latest 22in LED monitor isn't as cheap as the competition, but before you dismiss it out of hand, read our review to find out why it's actually quite a good buy. 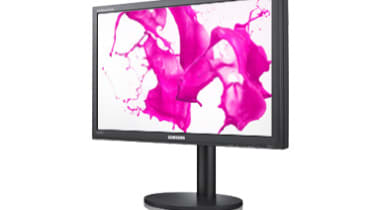 Samsung's BX2240 is a new 22in monitor with a resolution of 1,920x1,080 pixels from the Korean electronics giant. It has LED backlighting or, to be precise, edge lighting. Essentially, the LEDs replace traditional cold cathode fluorescent lamps. They shine parallel to the screen with the light diffused to evenly illuminate the whole screen. In our power consumption tests, it used just 18W.

We like the practicality of the SyncMaster's design. Both the stand and screen have a matt finish, so they're not reflective. The stand allows you to raise or lower the screen by 100mm and also rotate it to portrait mode. On the rear, all ports face backwards, so it's easier to connect cables than on displays which tuck the interfaces away facing the desk. There's no cable tidy, though, so it doesn't look particularly neat from the back.

VGA and DVI ports are present (as are cables for both in the box), but for HDMI, you'd need a DVI-to-HDMI adapter. Controls are located on the bottom edge of the screen and the menu is easy to navigate. There are all the usual settings, plus extras including gamma, colour effects and the unusual MagicAngle.

Enabling MagicAngle alters the contrast to improve viewing angles - useful for when you're using the monitor in portrait mode where the otherwise narrow horizontal viewing angle can make it hard to discern subtly different shades of colour. It sounds like a gimmick, but it works surprisingly well. There's also MagicEco which lets you set how much extra power saving you want to achieve, and reduces brightness accordingly. Given the low standard brightness of the BX2240, we can't imagine many people using this.

One of the buttons lets you cycle between Custom, Standard, Game, Cinema and Dynamic Contrast modes. Dynamic Contrast mode can improve image quality for certain types of applications, but it isn't much use for videos, as the brightness lurches noticeably when switching between bright and dark scenes. Standard mode is fine for office work, but we preferred to tweak the brightness and contrast manually to make the screen a little brighter so whites look less grey.

We first tested the BX2240 using a VGA cable, but contrast was appalling. This affected everyday tasks such as email as we couldn't see any difference between new messages which were white, and read mails which were a light shade of blue. We could improve this only by reducing brightness significantly. However, switching to the DVI interface, the problem largely disappeared, so we'd recommend using only this connection. Overall, contrast was still disappointing.

Colours were generally accurate, and looked natural. Viewing angles in landscape mode were slightly better than we'd expect for this type of LCD panel, so you don't have to be sitting square on to see accurate colours. Backlighting was even and there was no light bleed, where there's a brighter strip at one or more of the edges.

Apart from the height-adjustable stand, the BX2240 has no other extras - there are no speakers built in and no USB ports. At this price, though, that's acceptable. You can buy cheaper 22in monitors with this resolution, but you'll struggle to find one with height adjustment. If this is important to you, the BX2240 is good value.

Good image quality overall, but the BX2240 isn't as bright as we'd like. However, it's very frugal on power consumption and has a height-adjustable stand. There are no other extras, but if you need height-adjustment, this is a good choice.