The Nokia E5 smartphone’s dual home screens are designed to appeal to users who want business and personal configurations in one phone. But is this feature truly useful? Read our full review to find out. 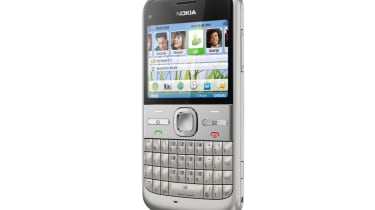 Lots of people carry two mobiles one for work and one for leisure. Many would really rather have just one phone for all situations and as long as you don't need to have two separate numbers, then that is perfectly achievable. The trick is to find a handset that's designed equally well for both business and leisure, by having features such as a comfortable keyboard for typing emails quickly,as well as a good quality camera and integration with social networks.

Nokia has designed its E5 smartphone with dual home screens, a feature it hopes will help you achieve this work-life balance. However, the E5 is unlike the iPhone and Android smartphones which have home screens with multiple pages that allow you to organise your apps and widgets to suit you.

The E5 has a single home screen which can be configured with different sets of apps, shortcuts and widgets, as well as different wallpapers so you can tell them apart at a glance. You then switch between them using an on-screen shortcut.

For example, you could configure one screen to provide access to the Wi-Fi sniffer and email notifications when you're working, while the 'home' screen provides shortcuts to Facebook and Twitter updates when you are not.

The Nokia E5 has Wi-Fi, HSDPA. assisted GPS and Bluetooth - features which will appeal to both business and leisure users. A measly 256MB of storage is built in to the handset itself, but a 2GB microSD card is also included.

Most importantly, the keyboard is well constructed which is just as well. Since the screen isn't touch-sensitive, it's what you'll use to control the E5 with. The keys are large and give a satisfying amount of feedback when pressed. The all-important @ key sits to the right of the space bar. There's a shortcut for turning Bluetooth on and off, which will please those who like to have an earpiece in for phone calls or want to use stereo Bluetooth for music or listening to the built in FM radio.

Another useful shortcut is the space bar - press and hold it to turn the camera flash on or off. This allows it to easily double as a flashlight with resorting to an app.

Above the keyboard are the Call and End buttons as well as the two soft keys all of which lie flush with the casing. The long and thin Home and Messaging buttons stand out since they have a more raised profile. A short press on the Messaging button takes you to the main Messaging menu. A long press creates a new SMS message. Pressing the Home button takes you back to the home screen, but a long press activates the application switcher. All of these shortcuts work very well.

What we aren't so happy about is the screen. As already mentioned, it is not touch sensitive. It doesn't rotate as there is no accelerometer, so you are stuck with its landscape format. It is sharp and clear enough, but it only has a meagre resolution of 320 x 240 pixels.

This low resolution combined with its small size of 2.36 inches means it simply isn't large enough for serious web browsing. This is a shame since the browser itself works well, since it's based on the same WebKit rendering engine as Apple's Safari browser and Google's Android Browser.

Partially making up for the lack of a multitouch screen, there are keyboard shortcuts for zooming in and out of individual web pages and an overview of a page which lets you manoeuvre a zoom box around so you can choose precisely what you want to focus on. Moving around within a page is done by using the very responsive D-pad which controls a tiny cursor that turns into a pointy finger when you pass it over a link.

You'll have to use these controls a lot to read most web pages due to the small, low resolution screen. A useful workaround to avoid lots of tedious zooming and panning would have been to have text reflow' and reformat so that lines break at the end the screen.

Flash Lite support is present, but this isn't equivalent to the full Flash Player found on PCs and Android 2.2 phones. Although it's enough to play YouTube videos, it's not good enough to play videos from other popular streaming sites, such as BBC iPlayer. This is particularly disappointing, as the iPlayer app available from the Nokia Ovi app store isn't compatible with the E5.

The camera shoots stills at 5 megapixels and has the unusual option of sequence shooting at intervals up to 30 minutes. Image quality is not as good as we'd have liked, with photos lacking in vibrancy and colour reproduction. There is a panorama mode which works automatically as you pan the phone around. It takes a while to process the final image though and it produces ridiculously wide and narrow photos at a resolution of 715 x 7056 pixels. Video shooting is limited to 640 x 480 pixels.

When it comes to social networking integration, the Nokia E5 will pick up info from Facebook relating to contacts already stored on the phone. For each of your contacts, it can download the Facebook profile picture and you can send Facebook messages too. However, you synchronise your contacts in their entirety with either Facebook or GMail. Nokia would rather you use its own Ovi online service to store and manage your contacts.

Alongside the support we'd expect for Microsoft Exchange, the E5 also works with Lotus Notes Traveller and Nokia's own Ovi Mail. The E5 supports up to ten email accounts which should be more than enough. While we are on the subject of Ovi, Ovi Maps is also included which is a good alternative to the Google Maps with Navigation app for Android phones.

With its comfortable keyboard and extensive email support, the Nokia E5 is more of a budget-priced alternative to a BlackBerry than it is to an Android handset or iPhone. In this respect it is a competent if basic business smartphone. However, we're not convinced that Nokia's dual home screens are any more useful than the multipage home screens on an iPhone or Android phone. The E5 would've been more useful as an all-round smartphone, both for business and leisure use, if it had a bigger, higher resolution screen as well as a wider selection of apps and a better quality camera.

The Nokia E5 is a keenly priced rival to RIM’s BlackBerry line of smartphones with its responsive qwerty keyboard and support for Microsoft Exchange and Lotus Notes Traveller. However, it's let down by its small, low resolution screen which makes it unsuited for web browsing.