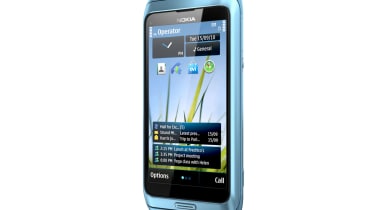 Nokia's Symbian^3 is a reinvention of the S60 operating system. The second device to come pre-installed with the new operating system is the Nokia E7, a smartphone aimed at businesses and a successor to the old E90 Communicator.

The as yet unannounced MeeGo-based Nokia N9 is probably going to be the Nokia QWERTY star of the show in months to come. Nonetheless, the E7 is a significant step forward for the Finnish giant's line of smartphones.

Where the Nokia E7 steps away from the N8 is its slide out QWERTY keyboard and tilting screen. The kick slide itself is a little hit and miss. It's hard to get your fingers in the precise position to push it up in one sweep, although this could be a fault of the prototype E7 we examined, rather than the eventual, finished design. We sure hope so.

The keyboard has large keys but they squared off rather than rounded off. This makes it a little harder to type on compared to a BlackBerry 9700 keyboard which also has raised, textured keys. The top row of keys, as expected on a sliding QWERTY keyboard, are pretty hard to reach since the top part of the screen gets in the way.

However, the fact that the screen tilts makes it much easier to type on the E7 when it's resting on a hard surface. It also makes watching video a lot easier, as you don't have to strain your neck attempting to find a comfortable viewing position where overhead lighting doesn't reflect off the screen causing glare.

The massive 4in display itself is pretty stunning. Although its resolution of 640x360 pixels may not be as high resolution as the one on the Apple iPhone 4, it's still larger than most and more than adequate.

Nokia's new ClearBlack display technology should improve visibility outdoors in bright sunlight. Although we weren't able to test this, it should hopefully be an improvement over the AMOLED displays often found on Android phones. These can often look very washed out in bright sunlight. All Nokia smartphones will have this technology in the future.

The WebKit-based web browser bundled with Symbian^3 definitely deserves a mention. It renders websites very well, even those with Flash content thanks to its Flash Lite support. It's easy to use to, as support for multitouch gestures allows you to zoom in and out of pages seamlessly. It's easy to switch pages, add bookmarks and do almost anything you can do with a desktop browser using the pop up menu.

All but the heaviest email users should be satisfied with the support for up to 10 email accounts, including Exchange services. Nokia has developed a new mail interface for its touchscreen phones that allows you to switch between different folders or even different email accounts easily and smoothly. Small pop up menus appear over the folder you're in, whether that's the inbox, outbox or sent folder, so you don't have to exit the app before opening a different mailbox or folder.

Nokia was keen to emphasise the bundled business-centric applications on the E7. Although we didn't spend enough time with the Nokia E7 to fully test all the applications, the pre-installed QuickOffice Dynamic Premium app should be very useful as it allows you to create, edit and share presentations, word documents and spreadsheets.

As with the Nokia N8, multitasking is supported. We had around ten different applications open at the same time, and suffered no lag as a result. One issue we did have with the device was a lag when swiping across the screen. The device we were using was running a pre production version of the firmware, so some actions were a little buggy, although Nokia's UK representative did emphasise that this would be fixed when the final version was released.

The Nokia E7 looks like a very promising business smartphone. Nokia has clearly put some thought into the design of the E7 in an attempt to win over business users. It also caters for those who want one unified device for personal and business use with its extensive media playback features. If the Nokia N8 and E7 are anything to go by, we think the Finnish manufacturer could quite easily sustain its grip at the top of the smartphone market.

Nokia's Symbian^3-based E7 smartphone is very promising and we'll be keeping an eye on it as it edges closer to release.