Microsoft has finally unveiled the public beta of its latest web browser, Internet Explorer 9. We explore the revamped user interface to see if there's enough to tempt back Firefox and Chrome users. 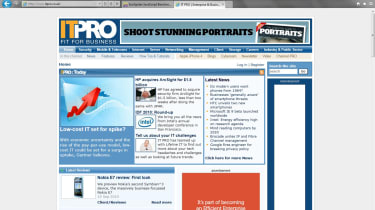 Internet Explorer 9 is the latest version of Microsoft's long-established web browser. Although platform previews of the new browser have been released over the past few months, they only included test versions of the Microsoft's new rendering engine and not the new user interface. The interface is now on show in the just-launched public beta, finally giving us a chance to see what Microsoft has been working on.

Microsoft claims the new HTML 5-compatible rendering engine in IE9 is faster and more standards-compliant than previous versions. We've covered the performance and compliance aspects surrounding the new rendering engine in our hands-on tests of the platform previews and little has changed in the public beta as far as we can tell in our tests.

At its London launch event for the public beta, the company was keen to emphasise how IE9's HTML 5-based graphics and animation capabilities would enable web site developers to code more graphically-intense and therefore immersive websites. Whether this means Microsoft is deprecating its Silverlight technology, the company's alternative to Adobe Flash, remains to be seen.

IE9 should be able to take advantage of your computer's graphics chip to accelerate HTML 5 video playback and other graphically intensive HTML 5 features, producing smoother video and animations than in other browsers. In our brief tests performance improvements were immediately noticeable on a desktop PC with a Nvidia GeForce 9800GT dedicated graphics card. However, we saw no difference on a laptop with an integrated Intel GMA 4500M HD chip. Since this is a very common integrated graphics chip, hopefully this omission is due to the beta nature of the browser.

Hopefully, Microsoft will release details of which graphics cards are supported soon. It's also worth bearing in mind that graphics card accelerated rendering is being added to beta versions of Firefox and Chrome too.

The new user interface is significantly less cluttered than it was in previous versions of IE. As with IE 7 and 8, the menu bar is hidden by default, but now so is the favourites bar. Tabs now sit to the right of the address box in a look very reminiscent of Google Chrome. The most commonly used menu commands have been combined into a single Tools menu, although the IE8 command bar and the traditional menu bar can still be displayed if you prefer.

The search box is gone searches are now carried out using the address box which searches your bookmarks and browsing history in addition to sending queries to your chosen search engine. It's easy to switch between different search engines using icons at the bottom of the drop-down menu that appears when typing into the address box. It works well and will be very familiar to users of Firefox's Awesome Bar and Chrome's OmniBox.

As one would expect from a Microsoft application, IE9 integrates well with Windows 7. Individual websites can be pinned to the taskbar as if they were applications, simply by dragging the favicon in the address bar to the taskbar. Jump lists allow easy access to different parts of the website simply by right clicking the taskbar icon, but these have to be coded specifically for IE9. Thumbnail previews of the site in the taskbar should have playback controls if music or video are being played, but we couldn't get these to appear even on sites recommended by Microsoft.

Notifications are less intrusive, such as when you download a file, appearing as small non-modal tabs that appear at the bottom of the screen rather than a dialog box that interrupts your browsing and has to be dealt with before you can get back to work. These look very similar to the notification boxes in Chrome.

The new SmartScreen Download Reputation Authority attempts to protect users from malicious downloads by gauging how reputable a website is when a user clicks on a download link. This judgment is based on factors such as how popular the site is with Bing users and whether the site has a signed digital security certificate. It's clearly a work-in-progress though as it's not enabled in the current beta.

Other minor but long overdue improvements include tabs that can be turned into separate windows as well as a Chrome-like thumbnail gallery of your most frequently visited sites that appear everytime you open a new tab. There's also a new add-ons manager where you can manage all third party add-ons, from plug-ins to search providers and extensions, in one place. Cleverly, IE will attempt to gauge the performance impact of any toolbar add-ons so you can disable them if they're too slow.

IE9 is a significant improvement over older versions of Microsoft's browser. However, many of the improvements require work from website developers before users can take advantage of them, while others are derivative of those in other browsers.

There's little here to tempt back users who have switched to other browsers, but it may help stem the number of new defectors companies which may once have put extra effort into deploying a third party browser may now be able to save time by sticking to IE instead. IE9 may also discourage computer manufacturers following the example of Sony which has chosen Chrome, rather than Internet Explorer, as the default browser on all new computers it sells.

The IE9 beta is a free download, so you can try it out for yourself. It will work with any computer that can run Windows Vista Service Pack 2 or Windows 7, but Windows XP users are left out. It's worth bearing in mind that is a beta version and it sometimes crashed or froze in our tests.

Judging from this first public beta, Internet Explorer 9 is a vast improvement over older versions of the venerable browser. IE9 isn't compatible with Windows XP, but since there's little that will make Chrome or Firefox users want to switch back, this isn't a crippling flaw as there are plenty of alternatives for XP diehards.