We review BenQ's latest 24in adjustable, high-resolution monitor to see if it deserves a place on your desk. 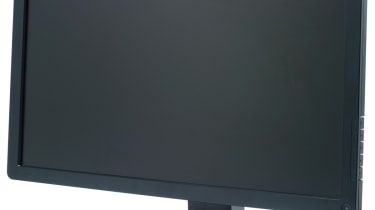 BenQ's V2410T is about as understated as monitors get. The logo is embossed into the bezel, so it's almost invisible and the only visible button is for power. As you'd expect from a business-oriented display, it has a matt finish which eliminates reflections. The bezel and stand also have a matt texture, so you won't see any distracting reflections at all. It isn't particularly thin for an LED monitor, but it isn't ugly either.

The backlighting for the 24in 1,920x1,080 pixel screen is provided by LEDs but, despite what many people think, LEDs don't necessarily increase brightness, contrast and saturation. We've seen very little evidence of LED-based monitors being superior in terms of image quality to those with traditional cold-cathode fluorescent lamp (CCFL) backlights.

One significant benefit LED backlit monitors do have, apart from the fact that they don't contain mercury (as CCFL lamps do), is that they tend to use less power. The V2410T used just 21W in our tests, while an equivalent 24in CCFL monitor would require roughly double that. Multiply the figure by the number of screens you need to deploy and the savings quickly become significant.

The V2410T has the same 1,920x1,080 resolution (a 16:9 aspect ratio) as most other budget 22-28in monitors currently on sale. As it uses TN technology, you can't expect the best image quality or colour accuracy, so it's best used for general office work rather than any critical colour work.

Image quality is by no means bad, though. Apart from being slightly dim (the brightness is just 250 nits), colours are faithfully reproduced and, in Standard mode, it's bright enough to use in any lighting conditions. Contrast is good - it's easy to see subtly different shades of grey for example. However, as is typical with TN panels, dark greys all merge into black and very light greys look no different from whites. This only becomes an issue if you're trying to process photos and videos.

Videos play smoothly with no discernable ghosting or juddering - just as we'd expect from a screen with a 5ms response time. Due to the matt finish, colours aren't as vibrant as on glossy screens, but do look more natural. You can also choose sRGB, or gaming, photo and movie presets. None of these had the brightness and accurate colours of Standard mode, which we'd recommend using for just about any task. Viewing angles are quite restrictive, especially vertically, so you'll need to sit straight on for the most accurate colours.

The screen can be raised by 130mm thanks to its telescopic stand, so finding a comfortable viewing angle shouldn't be difficult. It also pivots to portrait mode which is useful for editing long Word documents. There are VGA and DVI inputs, but no built-in speakers or USB hub.

If image quality isn't your top priority, and you want a fairly large display, the V2410T is a good choice. However, if you're happy to work with a slightly smaller 22in monitor, Samsung's SyncMaster BX2240 has the same resolution, LED backlighting and height-adjustable stand which swivels to portrait mode but also has slightly better image quality. Plus, it's 12 cheaper.

The V2410T isn't too expensive for a 24in monitor with a fully adjustable stand. However, image quality isn't spectacular and it's now ideal for colour-sensitive work. Although smaller, Samsung's BX2240 is a slightly better choice.