HP's latest ultra portable laptop not only has long battery life and is comfortable to use, but has lots of security features that businesses will appreciate. 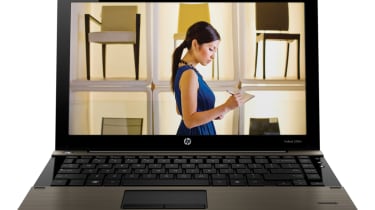 The ProBook 5320m is HP's latest ultra-portable laptop aimed at businesses. Despite this, it's surprisingly stylish. The brown brushed metal and black plastic design resembles a more compact version of HP's larger, heavier ProBooks such as the 4720s .

It weighs just 1.8kg and feels robust yet it's quite slender, although this effect is ruined by the protruding battery but it does prop up the keyboard at an angle which some may find more comfortable to use. The 5320m achieves its low weight by not having an integrated DVD writer. Although we've seen other ultra-portable laptops around this weight with built-in optical drives, these also cost more than the 5320m so it's an acceptable sacrifice.

Battery life in our light usage test, where the laptop is set to scroll through a series of webpages repeatedly until the battery runs down, was impressive. It lasted seven hours exactly, which is long enough to last a transatlantic flight. Battery life in our more demanding heavy usage test wasn't as long-lasting. When set to edit a series of photos repeatedly until the battery depletes, the 5320m lasted just over two hours which is meagre.

We suspect the rather short heavy usage battery life is due to the powerful 2.4GHz Core i5 450 M processor. Paired with 4GB of RAM, it managed an impressive overall score of 87 in our demanding Windows applications benchmarks. It's easily more powerful than the ultra low voltage processors often found in more budget-priced ultra-portables and should be able to handle all but the most strenuous tasks.

Frequent travellers will also appreciate the built-in 3G modem. In addition to the standard VGA port for connecting monitors and projectors, there's also a DisplayPort connector. Relatively few displays and projectors use DisplayPort though, but DVI and HDMI adapters are widely available. The only other unusual port is the combined microphone and headphone jack - some VoIP headsets which are designed to connect to separate mic and headphone jacks might not work with it.

The keyboard is comfortable to use thanks to the large keys. Although we'd prefer keys with a little more resistance and a bit less travel, they still feel responsive and comfortable enough for error-free typing. The touchpad is large and feels accurate. Although the buttons are large, they have too much travel and don't give enough feedback when pressed.

Security-conscious users will appreciate the built-in fingerprint reader which can be used instead of a password. It's also possible to disable the USB ports and the SD memory card reader from the BIOS, making it more difficult for users to copy sensitive data off the hard disk without authorisation. Another useful option is the ability to securely wipe the hard disk using multiple passes which would be useful if you ever need to replace or dispose of the 500GB hard disk. The BIOS is also automatically password or fingerprint protected, so these sensitive settings can't be easily changed.

As we'd expect from a business laptop, the 13.3in screen has a matt finish. Unlike a screen with a glossy sheen, it doesn't reflect as much light from overhead sources such as fluorescent strips. This results in reduced glare, making the screen easier to look at, but the trade-off is brightness. Although it's bright enough at the highest brightness setting, it's noticeably gloomy when brightness is reduced by 50% to conserve battery life. It's good enough for web, email and office tasks but is less than ideal for editing photos.

The standard warranty included with the 5320m only lasts for one year and provides collect and return service. Better coverage is available under the extended warranty which costs 97 ex VAT. This provides next business day onsite coverage for three years.

HP's ProBook 5320m isn't perfect. We wish the screen was brighter and the touchpad buttons felt more responsive. We can forgive these faults though, since the 5320m has long battery life, a comfortable keyboard and fast applications performance all at a surprisingly reasonable price. It's a good value ultra-portable laptop.