The latest all-in-one PC from Lenovo may not be as stylish as an Apple iMac or a Sony Vaio, but there are still plenty of reasons to buy it as our review reveals. 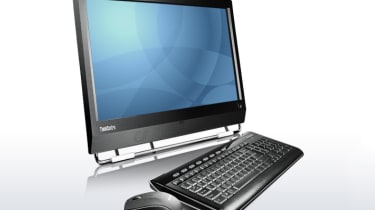 All-in-one PCs are a compact alternative to a desktop or tower PC. They can be more generously specified than a comparably priced laptop, so they can be better value if you don't need portability.

However, many of the all-in-ones we've seen to date have been hard to service and upgrade. This limits their appeal to businesses where the ability to get a faulty computer back up and running in the shortest time possible is a priority. Lenovo's latest all-in-one ThinkCentre, the M90z, is not only affordable but refreshingly easy to upgrade.

The M90z has a chunky, plain black design that's reminiscent of Lenovo's ThinkPad laptops. It's not much bigger than most standalone 23in monitors though, so it's still compact. The easel-like stand isn't very easy to adjust for a more comfortable viewing angle, requiring a fair amount of two-handed effort. The easel-like stand can be detached and replaced with either a VESA desk or wall mount or a more flexible tilt and swivel stand, but these aren't included and cost extra.

There's just 2GB of RAM and a 250GB hard disk, which is a bit stingy for a desktop PC at this price. The M90z is easy to upgrade though, especially when compared to other all-in-one PCs. Pulling a pair of latches releases the entire rear cover giving quick access to the slimline DVD writer, the 3.5in SATA hard disk and the two RAM slots. Both the DVD writer and the pre-installed RAM chip are space-saving versions more commonly found in laptops.

If you want to fit more than 4GB of RAM, then you'll need to upgrade to 64-bit Windows to take advantage of it all as there's only a 32-bit version of Windows 7 Professional pre-installed. As expected, there aren't any other drive bays or expansion slots, nor is the processor designed to be upgradeable. Fitting the rear cover back into place once you're done is a bit tricky, but this is a minor flaw. If the M90z needs servicing that can't be handled in-house by your IT department, it is backed by a generous three-year warranty.

Even with just 2GB of RAM, the M90z still performed reasonably well in our demanding Windows application benchmarks. It scored 82 overall thanks to its powerful 3.2GHz Core i5 650 processor. The Intel integrated graphics chip isn't as powerful as the dedicated graphics chips found in other all-in-one PCs at this price, but it's more than fast enough for everyday tasks such as playing high definition video. Even when churning through our tough benchmarks, the M90z stayed unobtrusively quiet unlike many tower PCs which have very audible cooling fans.

The 23in display has a high resolution of 1,920x1,080 pixels which is ideal for working on large documents such as expansive spreadsheets, or on two Word files side-by-side. The screen has a matte finish which is ideal for working under fluorescent office lighting, since it doesn't reflect light as easily as a glossy screen. The resulting glare from such reflections can be very distracting.

Images looked a little grainy, but image quality was otherwise good with reasonably wide viewing angles and bright colours. Touch sensitive controls for adjusting brightness and other settings are located just below the bottom right hand corner of the screen.

If necessary, a second monitor can be connected to either the VGA or DisplayPort connectors. DisplayPort-equipped monitors are still fairly uncommon though, so you'd almost certainly need an adapter to use this connector.

Unlike Apple's iMacs, the M90z has a pair of side-mounted USB ports which, in theory, should be more convenient and easy to reach than the rear four ports. In practice, those ports, as well as the adjacent headphone socket and memory card reader, are recessed so we had to swivel the whole computer round to get to them or crane our necks anyway. Privacy-conscious users will appreciate the integrated physical lens cap for the two-megapixel webcam. It's closed simply by sliding a switch on top of the computer.

A touchscreen version of the M90z is available for an extra 70, but we're not convinced of its usefulness in most situations, especially given the basic touch-sensitive capabilities built into Windows. It could be of more use in specialist situations though, such as on a sales floor.

The Lenovo ThinkCentre M90z is a quiet, easy-to-upgrade all-in-one PC with a large, high resolution screen and a generous warranty. We wish it came with more RAM and hard disk space as standard. We also wish it was easier to tilt and swivel with more accessible ports. Nevertheless, if you can live with these niggling flaws it's good value at just £749 ex VAT.