Keep your customers and guests happy, while making a bit of cash on the side, by providing them with WiFi internet access. A WiFi ticketing system can take care of everything from billing to security. Is Zyxel's system good enough for your business? Read our review to find out. 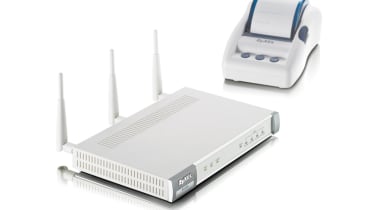 Zyxel's N4100 is an Ethernet WAN router, with four 10/100Mbit/s LAN ports and 2.4GHz 300Mbit/s 802.11b/g/n wireless. It comes with a LAN-connected ticket printer and a web interface that makes it easy to configure the printer to generate tickets of different pre-set durations at the touch of the button.

For each issued ticket, it'll create a new user with time-limited internet access privileges on its internal database. Up to ten printers can be connected to the N4100 via an Ethernet switch. Up to 100 users can be connected at the same time, although this can be boosted to 200 via a paid-for software upgrade but this adds hundreds of pounds more to the cost.

The router is designed to make it virtually impossible for devices connected via wireless to access anything connected to the LAN ports, which adds an extra layer of security. In any case, the router should ideally have a dedicated internet connection instead of sharing the same internet connection as the rest of your business.

All the configuration tools you'll need to set up the N4100 are built into its web interface. As well as guiding you through standard options like setting up a wireless password, it'll also help you through selecting what rights your users will have, such as using your SMTP server for their outgoing mail and whether they'll have to use their entire purchased usage time in one go or not.

Both of these are particularly useful yet uncommon options for a ticketing system. You can also decide whether you want to use Zyxel's own printer to produce access codes or generate them using a web interface and print them out on a different printer, which is an unexpected but useful option.

The Advanced menu is a bit more daunting, but contains a wealth of powerful and flexible options for everything from taking payment to directing users to a custom portal page and defining their maximum available upstream and downstream bandwidth. Unfortunately, although it has plenty of features, the router's interface is ugly and unwieldy; the advanced settings menu lists all the various options without any apparent logical order, which makes it frustratingly time consuming to navigate.

The many options include configuring credit card payment processing directly from your gateway portal using Authorize.net, iValidate.net, Secure Pay, WorldPay or PayPal. One can also create a "walled garden" of sites that users will be able to access without having to log in - handing for linking to your advertising affiliates or just providing a useful news portal for your guests. Up to three different pricing plans can be configured to suit your needs.

Once set up, the whole system worked reasonably well and produced some impressive data transfer speeds at short-to-mid range, although these started to drop off noticeably at greater distances. We saw throughput of 35Mbit/s at 1m, 34Mbit/s at 10m and 10Mbit/s at 20m. You'll probably want to invest in multiple wireless repeaters if you're going to use the system over large areas anyway.

Overall, Zyxel's WiFi ticketing system didn’t impress us. Aside from the N4100's confusing and poorly laid out menu system, the printer itself, with its white body and big blue buttons, feels flimsy and looks like something made by Fischer-Price. The system works well enough, but there’s no reason to buy it when you can get easier-to-configure hotspot ticketing systems that also cost less.