Keep your customers and guests happy, while making a bit of cash on the side, by providing them with WiFi internet access. A WiFi ticketing system can take care of everything from billing to security. Is the HSG200 + SDS100 system from little-known firm 4ipnet good enough for your business? Read our review to find out. 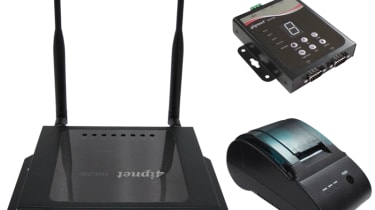 4ipnet's HSG200 wireless hotspot and ticketing kit is a considerably more serious-looking pair of products then Zyxel's competing ticketing system . It looks more businesslike with an understated black finish. The kit includes the HSG200 router and the SDS100 ticketing controller, to which you connect the provided thermal ticket printer using the included RS-232 cable. Both the HSG200 and SDS100 are ruggedised, with steel cases and mounting points to make them easy to secure to a wall or desk. Even the ticket printer has a reassuringly solid feel to it.

The main HSG200 unit is a relatively simple router with a WAN port, 2.4GHz 300Mbit/s 802.11n wireless and two 10/100Mbit/s LAN ports - one for your private network and one for your public network. More importantly, as well as simultaneous private and public networks, it has a lot of extra options that help you control the ticketing system, pricing and payment processing if you want to allow users to purchase access by debit or credit card.

The SDS100 has buttons allowing you to select from up to ten different ticket plans - the pricing and duration of each plan can be configured to suit your needs. You can connect multiple ticketing units to a single HSG200 router, allowing tickets to be sold from multiple tills or locations, but you'll need to connect them via an Ethernet switch to the single private network LAN port.

Basic setup and configuration was gratifyingly simple, although the single private LAN port makes it slightly more complicated than it has to be. If you don't have a switch, it's advisable to sort out the router's initial configuration via a LAN connection before you connect the ticketing console.

Once you've run through the router's simple web-based configuration wizard and connected the SDS100 to the private LAN port, the system is immediately functional, albeit in a basic way. Of course, further configuration is absolutely necessary, like setting up your desired security settings for both public and private wireless networks - we suggest WPA2 for the private network and open for the public one - you can carry out further configuration wirelessly with ease.

A basic firewall allows you to control traffic in and out of the public network, which is of primary importance. A routing table allows you to configure your NAT settings for more complicated routing, but we would recommend giving a guest access system of this kind its own dedicated internet connection without access to the rest of your network, rather than using the HSG200 to handle all your public and secure private routing requirements.

Alongside these features is a nicely implemented Quality of Service (QoS) system, which allows you define maximum up and downstream connection speeds for a few different kinds of traffic, such as video and voice. There's also support for various DDNS providers, although we don't recommend enabling remote access to the device unless absolutely necessary, as well as a few network inspection and status tools.

The HSG200's most important features are handled in its Users menu, where clear sub-menus make it easy to assign different types of access ticket to each of the HSG200's 10 options. Tickets can be defined with different durations and prices; you can also choose to have them expire at certain times and even upload a logo image to be printed on your tickets. If you set up an external payment gateway, guests can pay for access on their credit card when they log on to your network, rather than having to buy a ticket in person at the till. Payment can be processed via Authorize.Net, PayPal, SecurePay or WorldPay.

Additional options in the Network settings menus allow you to configure some sites to be part of a walled garden, visible to guests even if they don't have an access login. This is handy if you want either allow access to a couple of basic news sites or display web advertising content on your internal login gateway page. Hidden away is a useful option to allow your guests to send email using your SMTP server.

If you want to use the system over a wide area, you'll probably want to invest in additional wireless repeaters, but we were impressed with the HSG200's wireless performance nonetheless. Although its typical transfer speeds aren't going to break any records, throughput was remarkably consistent and stable, with speeds of 20Mbit/s at 1m, 22Mbit/s at 10m and 14Mbit/s at 20m.

4ipnet's ticketed internet access system is elegant and easy to use. It does exactly what it's designed for and can be up, running and secure in well under an hour, depending on what you require of it. If you can afford it, it's great. Although it's not as fast as Zyxel's N4100 and is missing one or two handy features, it's significantly easier to set up making it suitable for anything from a coffee shop to a hotel.