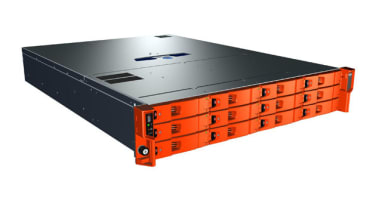 Since its launch last year there hasn't been a stampede to use Microsoft's Windows Storage Server 2008 (WSS2008), but most major storage vendors have made sure they have at least one WSS2008 product available in their ranges. LaCie is better known for its eye-catchingly designed range of consumer-level storage devices, but the company's new 12big Rack Network NAS and IP SAN appliance has both lots of storage and expansion potential.

The bright orange 2U chassis has room for twelve drives. The 6TB model on review comes equipped with six 1TB WD Enterprise SATA drives. A twelve drive, 12TB version costs 6,382 whilst 10,101 will get you a dozen 2TB drives.

LaCie has fitted the 12big with an Intel S5000PSL motherboard (designed specifically for servers of course) and has cannily pre-installed the operating system on a mirrored pair of internal 160GB Seagate SFF SATA drives. This leaves all the front bays available for general storage duties with the drives looked after by a separate LSI SAS RAID card.

The card can manage all twelve bays via the backplane's SAS expander and it also has an external SAS expansion port. If you need even more storage then you can plug in LaCie's 12big Rack Serial appliance which provides a further twelve drive bays that can all be managed by the main unit's RAID card.

The 12big comes with WSS2008 Standard which has the same support for memory, RAID and storage capacity as Server 2008 Standard but can only function as a single server and not as a domain controller. For NAS operations you get support for both CIFS/SMB and NFS shares. Microsoft's 64-bit iSCSI target software is also preinstalled.

The appliance can be managed using a local monitor, mouse and keyboard or accessed remotely over RDP. Either way, you get the familiar Server 2008 interface which makes further configuration very easy. Your first task is to load the LSI 3DM2 utility and create a RAID array for the front mounted drives. You have a fine range of choices and we went for a single RAID-6 array for all six drives which took just under six hours to complete.

The Windows Server Manager application provides access to all storage features from one location. A wizard guides you through the process of setting up network shares from assigning NTFS permissions, sharing over SMB and NFS to defining access restrictions. File screening, quotas and storage report features are all present. Respectively, these allow you to stop certain file types from being copied to the appliance, limit the amount of space users can consume and pull up detailed reports on storage usage.

iSCSI target creation is also wizard assisted and you can set up virtual disk snapshots for point in time backups of selected targets. Daily, weekly or monthly snapshot schedules can be created. A particularly handy feature is the option to release a snapshot and mount it as a new virtual disk.

Deduplication comes courtesy of Microsoft's Single Instance Storage (SIS), but bear in mind that this only operates at the file level and not the block level. Nor does it support system and boot volumes or remote drives. It uses a Groveler service to scan NTFS volumes designated for SIS operations looking for duplicate files which it places in a Common File Store.

To test SIS, we created two shared folders, copied the same 4GB data sample to each one and enabled SIS on the volume. After an hour the amount of used storage on the volume had dropped from 8GB down to only 3.5GB showing that file duplication was indeed occurring within our test sample.

For real world performance testing we called up a Dell PowerEdge R310 equipped with a 2.67GHz X3450 Xeon plus 16GB of DDR3 memory and running Windows Server 2008 Enterprise R2. With it mapped to a share on the 12big, drag and drop copies of a 2.52GB test file returned very high read and write speeds of 103MB/s and 99MB/s.

Using the 12big as an IIS FTP server saw equally high speeds with the FileZilla client reporting average speeds for uploads and downloads of 107MB/s. IP SAN performance was also impressive in our Iometer test the 12big managed raw read and write speeds of 112MB/s over Gigabit Ethernet.

WSS2008 powered storage appliances all come with a price premium and comparing them with the current crop of Linux powered systems shows how much more expensive they are. QNap's latest TS-859U-RP , for example, also has both NAS and IP SAN functions and can be purchased with 16TB of storage for around 2,100 ex VAT. However, most Linux based appliances can't be expanded beyond the main unit. The 12big scores well in this area as you can easily double capacity by daisy-chaining a second 12-bay appliance off the internal RAID card.

WSS2008 is also is easier to integrate into a Windows domain for better security and is more sharply focused on network storage duties. Typical appliances from the likes of QNap, Synology, Thecus and Netgear come with a lot of extra features aimed at consumers and small businesses such as photo and video sharing, IP camera surveillance and even web server hosting apps.

The 12big is better value than Dell's PowerVault NX3000 and has greater storage capacity, but it's still quite expensive for the amount of storage you get. If you want a NAS and IP SAN appliance with top performance and expansion potential and you don't mind paying a premium for them or using Windows then LaCie's 12big Rack Network is well worth considering.

The 12big Rack Network has very high storage potential and delivers extremely good NAS and IP SAN performance. Since it’s equipped with Windows Storage Server 2008 it’s not cheap, but Windows does make configuration and network integration very simple and, unlike most Linux appliances, storage can be easily expanded beyond the main unit.