The Livescribe Echo Smartpen is a pen that can capture written words and any accompanying conversations or ambient sounds, turn the result into a ‘Pencast’, and share it with others on open or closed web space. It can even run apps. Read our review to find out if it a useful, must-have business accessory or a bit of a gimmick. 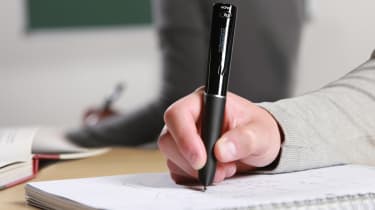 The pen is one of the oldest bits of technology on the planet. Although it has been refined throughout the ages, the basic concept has remained unchanged. Whether it's a stylus writing on clay, quill on parchment, a fountain pen or a biro, you use a tool to make an essentially permanent impression that can't easily be manipulated or duplicated afterwards. Although it's now possible to extend the reach of the inked word by photocopying or scanning, manipulating ink on paper is still more difficult than it would be on a computer.

Written text typed on a computer can be easily manipulated and distributed. However, not everyone finds typing comfortable and many are quicker at writing by hand than they are at typing.

Arguably, the Livescribe Echo Smartpen gives you the best of both worlds. It's an electronic pen that captures your handwriting as you write and transfers it to your computer. It therefore combines the convenience and portability of a pen with the flexibility of typed text.

Captured handwriting is stored on the Echo's 8GB of internal memory. It's then transferred to your PC via a USB cable. The Echo not only saves what you write, it can also recognise and save drawings. Thanks to its built-in mic it can also record what people around you are saying as you write. This data can also be transferred to a computer.

The potential here is great. For example, you can use the Echo to not only make notes during a business meeting or a lecture, but record what's being said as you write. This allows the nuances of speech, often lost in a written transcription, to be captured. LiveScribe calls these voice-annotated documents Pencasts which can be saved and shared as Flash movies.

Data from the pen is stored, reviewed and shared using the Livescribe Desktop software. The upload process starts automatically when the Echo is plugged into a USB port. Pencasts can be saved or exported to PDF.

However, if you want to turn your written words into typed, editable text, you need to augment Livescribe Desktop with the MyScript optical character recoginition (OCR) program, which costs an extra US$30 to download. Given the already non-trivial cost of the Echo, this should really be included in the box.

In practice it all works smoothly, but there are several constraints. The pen itself is larger than the average writing instrument making it somewhat unwieldy to hold and write with. Although it is smaller than its predecessor, the Livescribe Pulse Smartpen, it's still a bit too big to carry around in a pocket.

Obviously, if you want a comprehensive record of your writings you will have to remember to use the Echo constantly, for everything you write. You'll need to be sure its internal battery is kept charged and, most restrictively, you'll have to write on special paper.

An A5 sized 50 sheet book of this special paper is included with the Echo. There is a network of tiny dots on each sheet that make the paper look grey, and it is these that enable the pen to record what you write. The pen's tiny infrared camera captures pen movement over these dots at a rate of more than 70 images a second. You therefore can't write on ordinary paper and expect to have your writing recorded.

The paper also has some tappable controls along its bottom edge which allow you to access the pen's special features. You can use these controls to play back audio for example. There's a 3.5mm headphones jack on the top of the pen so you can listen in private though the pen also has a loudspeaker built in.

There are also controls for accessing the pen menu with information displayed in a tiny OLED screen that is just 96 x 18 pixels. This can display the time and also give information as you move through menus on the pen for things like settings and choosing and running applications.

This special paper doesn't come cheap. At the time of writing, a pack of four A4 notebooks cost 17.99 and four A5 notebooks cost 14.99 from amazon.co.uk. You can print your own paper on any 600dpi PostScript-compatible colour laser, but that is still an extra, on-running cost.

500MB of free online storage is available if you register your Echo with Livescribe. You can use it to share documents privately or publicly. If you opt to share documents publicly, anyone can see your uploads, and you can create links to those documents which can be emailed or tweeted. If you choose private storage, people will need a Livescribe account and your explicit permission to access your documents.

The Echo can run apps too. The Livescribe web site has more than 60 currently available, from translating dictionaries to the almost inevitable Hangman game. The pen comes preloaded with a virtual piano (you draw the keys then press the pen nib on them to make notes). These all seem more like an aside or adjunct than core features, but they might be fun and/or useful depending on your tastes and needs.

We really like the idea of the Livescribe Echo Smartpen and the practicalities of use have been well thought, although the extra expense of the OCR software is very irritating. However, to make the most of it you will need to revise how you approach one of the most natural activities we do, sticking to special paper and always making a conscious decision on whether to use the Livescribe Echo Smartpen.

The Livescribe Echo Smartpen is a clever product that allows you to capture the spoken and written world for later recall and distribution. It works well, but might be too unwieldy for some people and its high price could pay for some typing lessons, which may be a better use of money for heavy note takers.