Samsung's new LED projector has low running costs, but is this enough to earn it a place in your office? Read our review to find out. 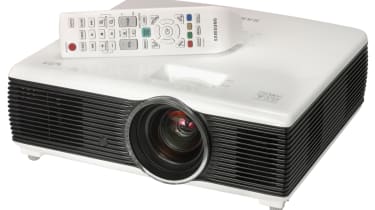 Samsung's F10M is one of the first full-size projectors we've seen to use an LED light source with LCD projection technology. It's also the first to hit the 1,000 lumen mark while relying exclusively on LEDs. There are brighter LED-based projectors available, namely Casio's Green Slim series, but these use a combination of laser and LED.

That's not a bad thing, but Samsung deserves praise for managing to achieve this brightness with LEDs alone. Unlike a traditional projector lamp, the LED light source will never need replacing, and should last for 30,000 hours: more than the lifetime of the projector. You could use it for eight hours a day, five days a week for 14 years and still not reach 30,000 hours. In eco mode, this increases to 50,000 hours, or around 20 years.

As there's no dust filter, it's completely maintenance-free. Plus, as there's no lamp to warm up, the F10M is ready to present in just a few seconds. It's also good to see three-colour LEDs being used with LCD, since this method doesn't suffer from the rainbow effect that most DLP projectors do. This is where the individual colours that make up the colour wheel (usually red, green and blue) are visible in high-contrast images when you move your eyes, and this can be very distracting for some people.

The F10M's 1,024x768 resolution doesn't match the widescreen resolutions of most modern laptops, but it's still the standard for business. Unfortunately, 1,000 lumens isn't. We'd normally expect 2,000 lumens or more, and it means that the F10M's image quality will look its best only when the lights are dimmed - something that might not be possible in your meeting rooms.

We found the image presets - which include Film, Presentation and Game - weren't much use, being too garish or too dark. Instead, we preferred the User setting, so we could tweak contrast, brightness and colour settings ourselves. This isn't particularly convenient, but you only need to do it once. After these adjustments, we were pleased with the natural, realistic colours that were produced.

Under normal office lighting, the F10M wasn't bright enough to produce great contrast, but brightness will depend heavily on how close you place the projector to your screen or wall. It's quite a short-throw projector, capable of a 70in image at around 2m. The 1.2x zoom lens gives you some flexibility, but there's no lens shift which would allow you to mount the F10M off-centre. What you do get is horizontal and vertical keystone, which is a digital version of lens shift, but it degrades image quality.

It's good to see a USB port for showing PowerPoint presentations without a laptop, but the F10M's size and weight (it's 5kg) mean it isn't really portable, so the advantage is questionable. There's also support for JPEG slideshows, plus Word and Excel documents. DivX, Xvid and WMV9 videos can be played, but not all our test files worked, so you're better off sticking with one format, and encoding any videos you need to that.

In terms of value, the F10M will save you a lot of money on replacement lamps, and it isn't too expensive to buy, either. However, the relatively low brightness compared to many other data projectors means that you'll either have to dim the lights or push the projector closer to your screen (and potentially have to settle for a smaller image). For this reason, we can't recommend it wholeheartedly.

We've yet to see the ideal LED projector: the F10M is a strong contender, but it's lack of brightness means image quality suffers in bright conditions. It's also fairly bulky, so won't appeal to the travelling presenter, despite the ability to show presentations from a USB drive.