Lenovo's compact business PC is certainly small, but is it perfectly formed? Our review has all the details. 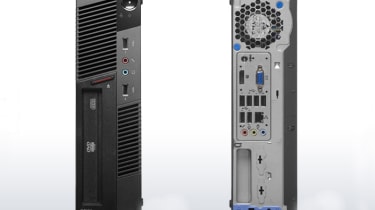 Lenovo's ThinkCentre range of desktop PCs have long had a reputation for excellent build quality and smart design. With its new M90p ultra small form factor model, the Chinese firm hasn't rested on its laurels.

It's not just the typically staid design that marks the M90p out as a ThinkCentre. The shrunken dimensions - the M90 is just 275mm across and 240mm tall when sat horizontally - haven't meant much compromise. Build quality is superb across the entirety of the machine with sturdy side panels, a solid frame and matte black finish that won't show up scuffs and scratches.

Ease open the M90 and it unfolds like a book. While it doesn't open completely flat, it still arches open enough to give easy access to all of the major components.

Due to the small size of the case, space is undeniably restricted. There aren't any other spare upgrade slots or bays in the machine and the PCI slot is only able to accommodate a half-height card. This still enough room for attaching a wireless card or, using the spare SATA II socket, an eSATA card.

Other components are just as simple to access. The hard disk rests in a purple plastic caddy and, rather than being attached with screws, is merely held in place with small rods. It's a neat bit of design, and means that disks can be quickly popped out of the caddy for easy replacing. If you need to get to the LGA 1156 processor socket, four screws unlock the CPU heatsink.

The only component to put up any sort of resistance is the DVD writer. It's fully encased in metal and, thanks to the angle of the unfolded chassis, can't be removed easily - you'll need to seperate the two halves of the machine with specialist tools if you need to replace this component.

One slightly disappointing omission is the lack of Lenovo's familiar colour-coding. Previous Lenovo machines, such as the cheaper ThinkCentre A58 for example, have had colour-coded motherboard jumpers and ports to make servicing and upgrading as easy as possible. In the M90, though, the only colour-coded parts are the purple clips that hold the motherboard and optical drive in place. It's an odd decision, but it will only affect inexperienced IT staff who will have to consult the manual to make relatively basic changes to the machine.

The machine's port selection is better. The front of the machine has a pair of USB2 sockets, while the rear has six more USB ports and Gigabit Ethernet. Usefully, the USB ports can be disabled in the BIOS, making it more difficult for data to be copied without authorisation onto external storage devices. There are VGA and DisplayPort video outputs the latter is an odd choice since DVI-I is much more commonly found on the vast majority of currently available monitors.

As usual, the impressive Lenovo build quality is partnered with a broad range of software that's more comprehensive than the applications offered on many rival PCs. The ThinkVantage Toolbox has a range of diagnostic, security and system health tools alongside tutorials, links to buy accessories and service upgrades.

The M90p is powerfully equipped with a 3.33GHz Intel Core i5-660 processor and 4GB of RAM. It fared well in our tests, scoring 95 in our multiple applications benchmark and 104 in our video encoding test. It's fast for a business desktop - few productivity applications will be able to stand in its way.

Surprisingly, this level of performance didn't require masses of power: the M90 drew just 22W from the mains when idle, with this figure rising to 86W when pelting through our benchmarks. It's far less than we're used to seeing from desktop machines, and even comparable with the power draw of so-called "green" PCs.

The rest of the specification is suitably business-like, with a TPM 2.1 chip and chassis intrusion detection. Windows 7 Professional 64-bit is pre-installed on the 500GB hard disk this should be more than large enough for most office tasks. Intel's GMA X4500 HD integrated graphics isn't able to cope with much beyond basic desktop computing and will be of little use in assisting the processor with especially demanding tasks. The warranty provides three years of on-site service, parts and labour.

Before you order, though, bear in mind that this level of quality doesn't come cheap. The model we reviewed costs 595 ex VAT, although this is is 100 less than Dell's Optiplex 980 . The Optiplex is very similarly specified and is slightly larger, but has the benefit of a few more expansion options, such as room for an extra internal hard disk. However, we're not convinced this is worth the extra 100 for most businesses.

There's plenty to like about the M90. It's fast and small, but it's also a little pricy. However, if you need lots of power in a compact case, it's a price worth paying.

Lenovo’s typical attention to detail means that its latest desktop PC has a clever design that allows easy access to all of the major components, and the firm’s ThinkVantage software suite is as good as ever, too. Couple this with a powerful specification and it’s clear that, while it’s overkill for most, the M90 is a very impressive business machine.