Eugene Kaspersky: The man, the myth, the maverick

We talk with Eugene Kaspersky about him, his company and his plans to topple Symantec in the web security space. 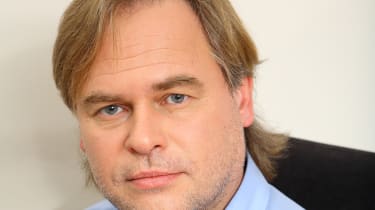 Being the head of one of the biggest data security firms in the world must be no easy task, but Eugene Kaspersky certainly seems relaxed when IT PRO met up with him in Munich.

What is intriguing about Kaspersky is not just his charisma or ebullient mannerisms, but also his mixture of the large and small, the ambitious and the humble.

He is man with a definite direction, far from the mythological preconceptions some may have, given his past associations (he is known to have attended a high-school co-sponsored by the KGB and the Russian department of defence, for whom he later worked for).

What I learn during our conversation in Germany was that he brings this strong personality to the company, understanding the need to mix high aspirations with a sensible business approach.

Dealing with the crisis

In terms of physical attributes, Kaspersky has changed a little since IT PRO spoke with him six months ago. Gone is his beard, as has the long hair he once sported.

Perhaps the financial crisis, while it has certainly not impacted his loquaciousness, has manifested itself into this trimmer look. Indeed, within the first few minutes of talking, Kaspersky admitted it had not been an easy past 12 months.

"It's been a hard year," he explained, shifting his beaming smile and welcoming eyes to adopt a more composed visage.

Before the crash hit, the company was seeing growth between 60 and 80 per cent in different parts of the world, he noted, but now the expansion rate has slowed dramatically year-over-year.

Despite these increased pressures, both financially and from more intense industry rivalry, the company has still had some positive signs.

In the US, the firm has seen around 80 per cent growth this year, Kaspersky said without seeming boastful, just stating the facts.

What is more, the firm has launched new products with greater protection. One of the company's big launches was been Kaspersky Internet Security 2011, which received a five-star review from IT PRO in July.

"We are improving our products by introducing new technologies and new levels of protection," he said.

Mr Kaspersky also has unequivocal confidence in both himself and his business, which he and his ex-wife Natalya Kaspersky set up in 1997. He believes that while the firm is not number one in its market, it is a leading light when it comes to innovation.

"From a technological point of view of end-point security, we are one of the leaders. Others follow our innovations. We introduce these technologies in our products, then others develop the same," he claimed, this time with an almost palpable sense of pride.

One exciting project is a distributed denial of service attack blocker. Currently it is only in prototype form over in Russia where development is ongoing.

"Once we are happy with this service in Russia we will introduce it in other countries as well," Kaspersky said. He is still unsure, however, when this time will come, although he estimated one or two years.

It looks likely Kaspersky will soon be the number two vendor in the web security space, behind main rival Symantec, at least according to the Russian chief executive.

Part of this rise up the rankings will be in part due to Intel's McAfee acquisition, which Mr Kaspersky, with his rich Russian accent, claims is good for the entire industry.

"Intel and McAfee, this marriage could have a very nice baby with a new hardware-based approach of internet security," he said. "I think because of Intel's needs in hardware based security, McAfee will shift focus from end-point systems to hardware-based systems. So I think that some customers of McAfee, they will switch to other vendors."

No doubt he hopes such customers will fall into Kaspersky's hands, rather than Symantec's. Indeed, he is relishing the competition with the Norton manufacturer.

"It will be a very interesting fight with Symantec. I am waiting."

When asked if he will explain Kaspersky's strategy to overtake Symantec in the space he declined, explaining: "Firstly, we don't want others to be ready for our actions. Secondly, we don't have a detailed plan we have a vision, we have a target."

He does note, however, that the firm will only concentrate on IT software security and will not shift focus onto any other area.

"They are technologies and products we are experts in and which we understand better than others. We are not going to deviate our business too far away from that," he said, sans blinking.

"We dig a little hole, but we dig it very deep."

The firm did actually create a prototype for a Kaspersky hardware security product in China, but he reasserted the company would not focus on this area.

One of the major talking points at Kaspersky's press event in Munich, and indeed the entire security industry at the minute, was Stuxnet.

Kaspersky believes, as others do, that this is a turning point in the history of industry, perhaps even the world. Attacks will now affect the physical world rather than just the noncorporeal one, hitting transportation, manufacturers, power plants and more.

So, what can we do about it? Well, Kaspersky is keen to talk with governments and has done in the past.

"I use every opportunity to speak to governments to explain there has to be more control on the internet, there have to be internet police forces," he says.

"I explain my view on how to design the internet in a more secure way."

Last year, the CEO met up with two British lords to discuss cyber crime and warfare, further emphasising his importance in the industry as a whole.

"The message I try to deliver to those guys is not to think in a national way. It must be international cooperation because the internet does not have borders," he added, quipping that in China the case may be different.

His concern is that governments, who have to cope with other major issues both at home and abroad, simply do not have enough time to tackle illicit internet-based activity. Perhaps security companies will be given more responsibility to help police the cyber world.

So what of the future? Where does Kaspersky want to take his company and, eventually, leave it?

One likelihood is that Kaspersky will go public. "I am just curious about it, I just want to test this action," Odd reasoning perhaps? Not in Kaspersky's eyes, who simply asks: "Why not?"

He does, of course, have more sensible reasons behind the plan: "I think sooner or later we will need to go public to get extra resources for acquisitions maybe."

As for buying other companies, Kaspersky will not dive into acquisitions before weighing up the targets in question.

"We are very conservative with acquisitions. It is OK to acquire a company as long as it has a similar corporate culture and they have technologies which are designed in a similar way," he said.

Other firms are more concerned about business, rather than about culture, he said.

"I am interested in business and people," Mr Kaspersky added.

Given the time I spent with him in the interview and then later in a less formal setting, you get a strong feeling he speaks the truth.