Apple's latest Mac Pro desktop computer isn't just a pretty face. It's the most powerfully-equipped workstation we've seen with its 12 processing cores and a staggering 12GB of RAM. How impressed were we? Read our full review to find out. 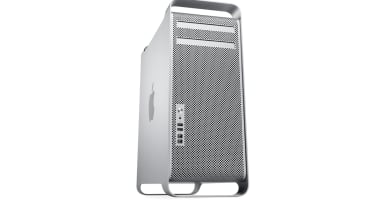 As its name suggests, the Mac Pro is Apple's high-end desktop computer. It's a workstation designed for seriously demanding tasks, such as page design, production-level video or photo editing and CAD work. Most of Apple's computers have a very locked-down design with a limited choice of specification options. The Mac Pro, on the other hand, is a tower computer that's designed to be easily upgradeable and its specifications can be endlessly customised if you order it from Apple's online store.

Given its status as Apple's most powerful Mac, we weren't surprised to discover that Apple had sent us a review unit with an incredibly high-powered specification. It comes equipped with a staggering 12GB of RAM and not one, but two six-core 2.93GHz Xeon X5670 processors. MacOS X 10.6 is preinstalled on a 512GB solid state disk (SSD). It's accompanied by a huge 2TB hard disk for storing all your files. It's a monster of a computer.

Thanks to Intel's Hyper Threading technology, the 12 physical processing cores in our Mac Pro are seen by both the MacOS and Windows as 24 cores which should boost performance even further. The Xeon X5670 processors can also temporarily boost their clock speed from 2.93GHz to 3.33GHz to accelerate application performance even more.

However, despite these impressive capabilities, the Mac Pro wasn't as fast in our Windows application benchmarks as one would expect. As with many commercially available applications, our benchmarks don't take full advantage of all the available processing cores. For example, in our multiple applications test, our Mac Pro scored just 201 which means it's just over two times as fast as our quad-core AMD Phenom II X4 base system. One therefore shouldn't expect the 12-core Mac Pro to outperform an existing quad-core computer by six times, although this does greatly depend on the software you use. It's baffling that so many applications still don't take full advantage of multiple cores - multiple core processors have been commonplace in computers for the past four years and are now ubiquitous.

3D graphics performance is also impressive. The ATI Radeon HD 5870 graphics card has 1GB of memory and managed incredibly high frame rates in graphically intensive games 89fps in Call of Duty 4 and 62fps in Crysis. This impressive 3D performance isn't just beneficial for games; it shows that the Mac Pro should have no trouble handling demanding 3D modelling, rendering and CAD programs.

Despite its impressive performance, the Mac Pro is quiet and won't sound intrusive in a hushed office. It's by no means silent a low hum is audible if you listen closely enough. This isn't likely to be a distraction though, especially if the Mac Pro is placed under your desk, as with most tower computers.

The Mac Pro's aluminium cheese grater-like appearance hasn't changed at all since its debut and looks almost identical to its predecessor, the Power Mac G5, which was first introduced in 2003. This isn't necessarily a bad thing, as it still looks sleek and feels impressively robust and well-made.

More importantly, the Mac Pro is incredibly easy to upgrade. Pulling the rear-mounted latch releases the side panel giving almost instant access to the interior. The six RAM slots and the two LGA1366 processor sockets are located on a daughterboard. Pull a pair of latches and the daughterboard disconnects from the motherboard allowing it to be pulled out and placed on a tabletop. This makes upgrading memory much less fiddly than in other tower computers where you have to work within the cramped confines of the tower case.

Unlike Intel's consumer-grade processors, the coolers for the Xeon chips are held in place by easily removable screws rather than hard-to-remove pushpins. In the unlikely event you want to replace or upgrade the processors yourself (a process not covered under Apple's warranty if something should go wrong), this design choice will make the process a lot easier.

More common upgrades are easy to achieve thanks to Apple's elegant design. The metal bracket holding the DVD writer pops out, although it does require some force. There's room for one more optical drive. Fitting it is as easy screwing it into place and plugging in the supplied SATA cable. There are four bays for adding more SATA hard disks or SSDs two are empty in our review system. Fitting hard disks is very easy - once the hard disk is screwed into the supplied caddy it simply slots into the bay and plugs straight into the SATA port on the motherboard no fiddly cables required.

Fitting a SSD is slightly trickier. Most SSDs have a 2.5in form factor since they're designed to fit laptops. To fit the 3.5in caddy and bay, the supplied boot SSD in our review system was mounted inside a 2.5in-to-3.5in adapter. Annoyingly for upgraders who may wish to add a SSD later, this adapter isn't available from Apple separately, but third party versions designed for Windows PCs should fit. A RAID array can be created in software using the MacOS Disk Utility program. If you want a more robust hardware RAID array, you'll need to invest in a PCI Express RAID card.

802.11n wireless networking, Bluetooth are built in and there are FireWire 800 as well as optical audio inputs and output ports. The graphics card has three video outputs, a DVI port and two Mini DisplayPort connectors, so three monitors can be connected simultaneously.

An Apple USB keyboard, with a full numeric keypad and navigation keys unlike the optional Bluetooth keyboard, is included in the box. Apple's Bluetooth Magic Mouse is included, but we're not fond of its low profile shape which we don't find very comfortable to hold. Its smooth multitouch surface can act as two buttons, a scroll wheel and a pad for recognising multitouch gestures. For our fingers, it's too small to be used effectively and comfortably for multitouch though.

Disappointingly for a computer at this price, the Mac Pro only comes with a one year collect and return warranty. Onsite service is available if you purchase the three year AppleCare extended warranty, but some form of onsite service should be included with the standard one year warranty.

The 12-core Mac Pro is an undeniably impressive workstation. If you use applications that can take advantage of its powerful processors and graphics card, it's very fast. The elegantly designed case makes it almost effortlessly easy to upgrade. However, the 12-core model, whether the off-the-shelf version or the heavily specified version reviewed here, is very expensive. Even if you can settle for a bottom-of-the range pared-back quad-core model, which retains the same elegant chassis, it too is pricey at £1,999, although it's still competitive compared to other workstations from rival companies such as Lenovo. Nonetheless, if you can afford it, it's a great buy, but make sure you really will take advantage of all its features – otherwise you should opt for a cheaper business or consumer desktop computer.