The Eternus CS800 is Fujitsu’s first mid-range deduplication storage product and offers an impressive amount of storage and lots of expansion potential. Read this exclusive review to see if it also delivers on Fujitsu’s storage saving promises. 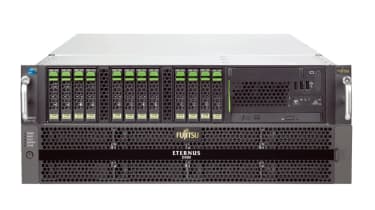 Fujitsu has traditionally sold a wide range of network storage products for SMBs and mid-sized businesses, but the new Eternus CS800 is the first for this market to have deduplication features. The CS800 aims to be easy to install and deploy as well as having high storage capacity and impressive expansion potential.

The eleven hot-swap drives in the RX300 are arranged in mirrored arrays and used for the operating system and the deduplication indexing database. It's paired with a single Eternus DX80 disk array which provides general data storage.

The DX80 arrays provide masses of redundancy as their dual RAID controllers function in active/active mode so access to the RAID arrays won't cease if one of the controllers fails the other will take over. Each of the controllers has two 4Gbps FC ports and these are cross-linked to a pair of QLogic dual-port FC adapters in the RX300 to create multiple, redundant pathways.

The DX80 comes as standard with a dozen 1TB SAS drives preconfigured as an 8TB RAID-6 array. Using the dedicated SAS expansion ports in each controller, you can daisy-chain nine more DX80 arrays from it allowing raw capacity to be boosted in stages up to 80TB.

There's more as the DX80 controllers have Fujitsu's unique Cache Protector. This replaces traditional batteries with a combination of capacitors and Flash memory so that in the event of a power failure the cache contents are written to memory. The benefit here is that when power is restored, the capacitor takes a lot less time to recharge than a battery pack and can therefore provide full protection again much more quickly.

Installation starts by pointing a web browser at the head unit's default IP address where you'll be greeted by a well designed, intuitive interface. It was very familiar to us as it's identical to that presented by Quantum's DXi4520. This isn't a bad thing as we found Quantum's software very easy to use when we tested its SMB appliance.

Your first job is to decide how you want your network ports to be used as they can be kept separate or bonded together in load balanced, redundant teams. Note that one port on the Gigabit cards is retained for service and maintenance functions so you actually have seven ports to play with.

The CS800 supports both CIFS and NFS shares and for user access control you can enable workgroup or AD modes. Deduplication can be enabled on a per share basis, but once set it can't be removed. However, you can specify backup windows for a share during which time deduplication is disabled.

A big advantage of appliance-side deduplication is that host systems are totally unaware of the processes involved. Consequently, it supports any backup software you care to mention and even drag and drop copies to a share on the appliance will be deduplicated.

Along with all data deduplication and compression features, the price for the review system includes replication to a remote appliance. You also get Symantec's OpenStorage (OST) plug-in which allows the appliance to present itself as storage servers to systems running NetBackup. You don't get the esXpress software which Quantum bundles with its DXi4500 appliances. This is designed to automate backing up VMs running on ESX Server systems, but we found it extremely difficult to deploy and manage so it's no great loss.

For testing we used our own set of tests specifically designed to look at deduplication performance for file server operations. We use a 4GB data set consisting of 1,000 files and introduce controlled changes within a percentage of the files during a simulated backup strategy consisting of daily incrementals and weekly full backups.

To manage the backups we installed CA's ARCserve r12.5 on a Dell PowerEdge R310 Windows Server 2008 R2 system. To use the CS800, all we needed to do was create a share and declare it to ARCserve as a disk based backup device.

After the first full backup was run, we modified 2 per cent of the data in 40 per cent of the files prior to each subsequent backup. At the end of a one month backup simulation we saw a good deduplication ratio of 7.2:1 which, unsurprisingly, is virtually identical to that achieved with Quantum's DXi4520 for the same test.

To test general throughput performance we ran a full backup of a 40GB data sample comprising 16,000 files. Run over Gigabit Ethernet, the job returned an average speed of 45MB/s or 160GB/hour.

The deduplication technology used by the CS800 came under fire earlier this year with claims that restoration speeds were being hit hard when data was retrieved from the block store. We restored the entire 40GB data sample to a new location on the test server and saw an average speed of 37.4MB/sec showing these claims to be largely groundless.

Pairing an RX300 S5 server with DX80 disk arrays is a smart move by Fujitsu as this hardware combination has superb levels of redundancy. Our tests show the CS800 is capable of making some big savings on storage requirements for backup operations and we also found it particularly easy to deploy and manage.

Our real world tests show that the CS800 is capable of delivering big reductions on storage usage along with good backup and restore performance. In terms of price, it compares well with other mid-sized deduplication products but scores better for its high expansion potential and superb levels of redundancy.