ViewSonic's latest monitor is reasonably priced and its energy-saving LED backlight can help cut running costs, but does it also have good image quality? Read our review to find out. 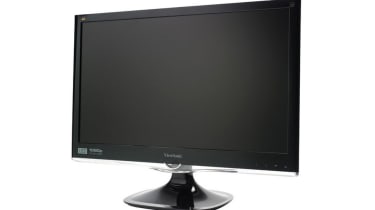 ViewSonic's extensive range of monitors can be quite confusing, but the -LED suffix of this particular model leaves no-one in the dark about its backlight. Instead of traditional fluorescent tubes, which contain mercury, the VX2250wm uses LEDs.

As we've said before, an LED backlight doesn't automatically mean better image quality - this is a myth as far as we're concerned. One undeniable benefit is lower power consumption so if you're buying lots of monitors for your company, replacing your old monitors with LED-backlit models will save money. However, it equates to around 5 per monitor per year, so savings may not be quite as big as you were expecting.

We can't describe the VX2250wm-LED as an attractive monitor. The glossy black frame and base are highly reflective, and the reflections can be distracting compared to monitors with a matt casing. Fortunately, the 22in screen has a matt finish so it doesn't reflect anything. We didn't like the large LED and 1080p Full HD logos on the bezel. Although we're generally not fans of touch-sensitive controls, the VX2250wm-LEDs proved responsive. The transparent strip across the bottom attempts to differentiate the monitor from the crowd, but it ends up looking a little tacky.

On the rear you'll find standard VESA mounting points, plus VGA and DVI inputs. You can switch between these with the '2' button on the front, and use the up/down arrows to increase or decrease the volume of the built-in speakers. It isn't obvious that the VX2250wm-LED has speakers, but a pair is built into the rear, facing the ceiling. They're loud enough for Windows sounds, but that's about all they're good for.

Rather than lots of pointlessly obscure names for controls in the menu (as we see so often these days) ViewSonic sticks with the basics. There are simply controls for brightness, contrast and colour. With the latter, you can select various colour temperatures, or control the red, green and blue levels independently.

Unlike some LED-based monitors we've seen, contrast was good. This means that slightly different shades of the same colour were easy to distinguish from each other. Also, vertical viewing angles were better than we'd expect from a screen of this type. Horizontal viewing angles weren't the best, but you'll see accurate colours as long as you're not sitting off to one side.

Due to the matt screen, colours aren't as vibrant as you'd see on a glossy monitor but they're still realistic and accurate enough for general office work. Brightness is our only complaint, and a minor one at that. You'd only notice that it isn't as bright as a typical fluorescent-lit monitor in the sunniest office.

We measured power consumption at 21W, which is what we'd expect for a 22in LED monitor. However, the VX2250wm-LED has one last trick: an auto-off feature. This turns the monitor off when it detects your screensaver has activated, and you have to physically switch it on again.

This and the relatively low price make the VX2250wm-LED an attractive choice if you want a 22in monitor and don't need height adjustment and the lower-than-average brightness doesn't put you off.

Good image quality, but the VX2250wm-LED isn't particularly attractive and its brightness is below average. That said, power consumption is relatively low and the auto-off feature should save even more on your electricity bill.