Lenovo claims its ThinkStation C20 PC is the world's smallest dual processor workstation. It's certainly compact, but is it as powerful and expandable as the competition? Read our review to find out. 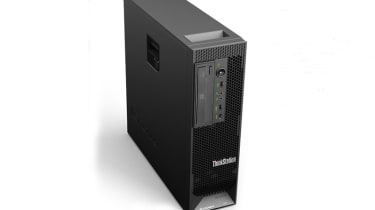 The ThinkStations are Lenovo's line of workstations aimed at professional users, such as video editors, publishers and artists who model and render 3D graphics. The company's latest model, the C20, is comparatively compact for a tower PC. It's small enough to fit into a carry-on suitcase and can even be rack mounted, yet it's equipped with a powerful quad-core Xeon processor and a professional graphics card.

Our review unit came equipped with a 2.67GHz Intel Xeon E5640 processor and 6GB of RAM. It fared well in our demanding Windows application benchmarks, scoring 142 overall, yet stayed remarkably quiet. It won't sound intrusive in a hushed office or studio.

The Quadro graphics card is a professional model. Many specialist software companies guarantee the reliability of their software when used with such cards a guarantee they don't offer on consumer-grade cards which are often designed with performance rather than reliability in mind. The card has four DisplayPort connectors, so up to four monitors can be connected simultaneously. Most monitors don't support DisplayPort though, so unless you're buying new screens to go with your workstations, you'll need adapters for your existing monitors too.

Applications performance can be boosted even further by plugging in another Xeon processor into the second LGA 1366 processor socket. Since each processor has its own integrated memory controller, you'll also need to plug in another set of RAM for the second processor.

Bizarrely though, fitting Intel's stock Xeon cooler would foul the path of the DVD writer. The optical drive would therefore have to be removed to make way for it. It's not a fatal flaw since external DVD writers are cheap and widely available. According to Lenovo, it's possible to instead fit a low-profile Lenovo-designed cooler. This would allow both a second processor and the internal DVD writer to be fitted simultaneously. Although third party low-profile coolers should work, Lenovo doesn't support such configurations.

Other upgrade options are more sensibly designed. Although the C20's interior isn't nearly as elegantly designed and easy to access as the Mac Pro's, it's still straightforward to work on. The side panel can be locked using the included key to deter casual thieves. There's room for two more hard disks if the provided 500GB model isn't large enough. There's a second PCI Express x16 slot for adding another graphics card. There are also two PCI slots, as well as PCI Express x1 and x4 slots too, for adding peripherals such as a WiFi or USB3 adapter.

It's a shame USB3 isn't built in, as USB3 storage devices can be four times as fast as their USB2 counterparts, but there's an eSATA port instead which is a reasonable substitute. There are plenty of USB2 ports too two up front and six round the back. Unusually, there are both optical S/PDIF inputs and outputs, although sound production professionals will probably prefer a dedicated sound card anyway. As we'd expect from a Lenovo computer at this price, a three year warranty with onsite service is included.

There’s a lot to like about the ThinkStation C20. It’s fast, quiet, relatively compact and comes with a professional-level graphics card as well as a lengthy warranty. The interior could be better designed and laid out though, especially if you want to add a second processor. It’s more or less evenly matched against the low-end quad-core Mac Pro – Apple’s workstation is easier to upgrade but has a less-generous warranty and comes with a consumer-grade graphics card. Think carefully about what you want from your workstations before purchasing.