The Acer beTouch E130 marries a mini QWERTY keyboard and Android at a low price. For some it will be a match made in heaven, but others will want a quickie divorce. Read on to find out why. 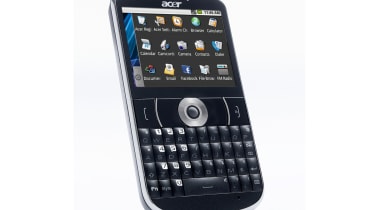 BlackBerry fans will adapt quickly to the E130's keyboard. The keys are relatively large and feel responsive. They are big enough to find with the pad of a finger, and the predictive text entry system works quite well. It isn't the fastest and most accurate mini keyboard we've ever used, but it's not far off.

A small trackball sits above the mini QWERTY keyboard. It's similar to the trackballs we've seen before on the original BlackBerry Pearl and some HTC Android phones, such as the Hero. It rolls comfortably under the thumb and is a good alternative to finger swipes for navigating the Android interface. The trackball is flanked by the usual Home, Menu, Search and Back buttons that we'd expect to find on an Android phone, as well as Call and End buttons.

Acer has skinned Android, but not so much as to be completely overpowering or to hide the native Android look and feel. One notable change is that the tab you normally slide upwards to get into the main apps menu needs to be slid horizontally from the right edge of the screen towards the left. Once the draw is open you revert to scrolling vertically through the complete apps list.