The versatile ProLiant DL380 is one of HP’s top selling 2U rack servers. Read this review to find out if the new seventh generation model can build on this enviable reputation. 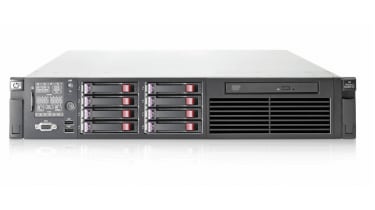 HP is very proud of the ProLiant DL380, claiming that its G6 model is the world's best selling 2U rack server. The latest seventh generation version clearly has a lot to live up to, but it aims to add even more features to the mix with a high priority on flexibility, management and power monitoring.

Remote management is a key area of focus for HP and this is one of the first ProLiant servers we've seen with the new iLO3 embedded controller. HP claims its remote control is eight times faster than the iLO2 and virtual media services are over three times faster.

Its integrated Windows remote console can be more easily scaled to stretch across multiple monitors and the Linux version of the console has more features than previous versions. Access security for iLO controllers has always been good, but this now gets beefed up even further with AES hardware encryption.

HP still insists on keeping the best iLO features back as an advanced upgrade. An increasing number of vendors are providing essential support functions such as server remote control as standard, but to get these on the iLO3 chip you must buy an upgrade license.

You'll also need this upgrade if you want the power management and video playback features. The former provides graphs and analysis of power consumption plus regulation and capping controls whilst the latter can capture events such as the boot up process and allow you to view it at your leisure from the iLO Video Player utility.

During testing we confirmed that the new remote control services are noticeably faster with a mouse action that exhibited little or no lag. The new Windows remote console could be smoothly stretched and shaped to whatever dimensions we desired.

HP has made some significant changes internally to the new server as the massive metal plate that shrouded the entire motherboard in the G6 has been turfed out and replaced with a smaller version. This only covers the rear half of the motherboard, is used to support the riser cards and is much easier to remove and replace.

The huge cooling shroud in the G6 also gets its marching orders. There's now a smaller transparent cover that fits around the centralised processor sockets rather than over them. This arrangement seems to work well. With four of the six possible hot-plug cooling fans in place, we found this server to be nearly silent.

As with the G6, you have a good choice of expansion options - the single riser has three PCI Express slots. You can add a second riser and in both cases you can have versions with a mix of PCI Express and PCI-X slots.

For sheer storage capacity, the DL380 is still the best in its class with room at the front for up to sixteen hot-swap drive bays. IBM's new System x3650 M3 has just caught up as it now has the same number, but Dell's PowerEdge R710 2U rack server still lags behind with room for eight SFF drives.

However, upgrading to sixteen drives requires replacing the blanking plate on the front panel with a second eight-drive bay. This means you will have to remove the optical drive and you'll also need to add an extra Smart Array or Smart SAS expander PCI-E card to manage it. Thanks to the embedded Smart Array P410i RAID controller, there are eight SAS connectors on the motherboard. The 256MB cache module has a plug for an optional battery backup pack.

Virtualisation fans get a nod as the server has both internal USB and SD memory card slots for booting from an embedded hypervisor. However, if you want boot media redundancy than check out the PowerEdge R710 as Dell upgraded this server earlier this year with dual internal SD card slots where one automatically keeps a backup of the primary card.

The price for the review system includes a single 460W hot-plug power supply but you can fit two for redundancy. HP also offers 460W, 750W or 1200W versions and you can choose from any of them as they all share a common slot form factor.

Power consumption was very low, although bear in mind the review system had a fairly basic specification. With Server 2008 Enterprise R2 in idle we measured a draw of only 72W. With the single E5640 quad-core Xeon processor under load from SiSoft Sandra this peaked at a mere 145W.

For a 2U rack server, the ProLiant DL380 G7 is capable of taking on a wide range of roles. It's not as good value as Dell's PowerEdge R710, but it beats that server hands down for storage capacity and expansion potential.

HP's management package is also easily the best on the market with the iLO3 controller providing a unique set of features. HP's ICE software is easier to deploy than Dell's Management Console and is capable of providing superior power management and monitoring functions.

HP’s ProLiant DL380 G7 is a standard setter in so many areas. It not only has lots of storage capacity for a 2U rack server, but also excellent expansion potential, extremely good build quality as well as HP’s feature-packed iLO3 embedded controller and Insight software.