The Huawei IDEOS is a remarkably inexpensive Android 2.2 smartphone, but its low cost may be a false economy. Sandra Vogel takes a closer look in our review. 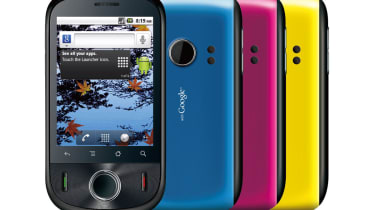 Huawei is not a household name in the UK, but the Chinese company's mobiles phones, mobile broadband dongles and portable Wi-Fi routers have been rebadged and resold by British network operators for quite some time. The IDEOS is the first handset the manufacturer has sold in the UK under its own name though. It has yet to be picked up by a network operator, but you can find it online SIM free for around 199 inc VAT at the time of writing.

Despite its low cost, the IDEOS runs Android 2.2 and is the first handset we've seen to come with it pre-installed rather than via a software upgrade. For that reason alone it deserves some attention.

Android has been left unskinned, so that you get to see it in its vanilla format. That's not a bad thing. We have seen some terrible skins as well as some superb ones, but the standard Android interface is actually pretty good in its own right. This should also mean that future upgrades to the operating system will be available more quickly than with skinned handsets.

The presence of Android 2.2 is especially welcome since it has far better Exchange email, address book, calendar and security support than previous versions of Android. Exchange administrators can even remote wipe data in the event the phone is lost.

However, there are some let-downs. Android 2.2 is the first version of Google's operating system to support Flash. That means you should be able to view streaming video and other interactive content on the web, but you don't get Flash support on the IDEOS because the processor isn't powerful enough to handle it. Depending on how much you value streaming media content, this factor alone could be enough to prejudice you against the IDEOS entirely.

The 528MHz processor doesn't sound very impressive, compared to the 1GHz processors found in more expensive smartphones. However, apart from the Flash issue, it actually performs quite well with the interface feeling smooth and lag-free overall. However, due to the meagre 256MB of RAM available, running lots of applications simultaneously can cause slowdowns.

Another potentially big point against the IDEOS is that it doesn't support multitouch. The presence of a capacitive screen would lead you to think that multitouch, with its pinch-to-zoom support would be here, so its absence is a real disappointment.

It is most noticeable when browsing web sites, where you are left using the standard Android feature of a double tap to zoom in, another double tap to zoom out, or the zoom buttons which appear when you make a single tap and which give you finer control. It isn't the worst system in the world, but we think multitouch pinch-to-zoom feels much more natural.

Another very practical consideration is that the screen is small. Measuring just 2.8 inches diagonally and with a cramped resolution of just 320 x 240 pixels, any app which displays a lot of data has a decidedly cramped feel to it. Web browsing, for example, is not the most satisfactory experience you'll have to do a lot of panning around or zooming in and out with almost all the pages you visit.

Text entry too can be a trial. With the handset in tall mode the QWERTY keyboard is likely to be too small for all but the daintiest of fingers to get to grips with. It is better in wide screen mode, but even there the keys feel cramped.

The 3.2 megapixel camera lacks a flash and produces mediocre-quality photos at best. This isn't unusual though we've seen plenty of other Android handsets with disappointing cameras.

There is a 3.5m headset connector on the top edge of the IDEOS. Huawei's included headset sounds quite poor though, so substituting your own will almost certainly ensure better quality output. The phone's speaker, though, is remarkably good in terms of both quality and volume.

The music player, like the camera, requires a microSD card before you can use it, since the 256MB of built-in storage likely won't be sufficient for multimedia purposes. The handset doesn't come with a card but they're widely available. Access to the SD card slot is blocked by the battery so you'll need to power down the IDEOS to swap cards in and out. As some people like to manually transfer music and other files to their storage cards this could become a real nuisance.

The handset is small, which makes it comfortable to hold in the hand and easy to slip into a pocket. There are four touch sensitive buttons beneath the screen providing access to the standard Android functions of Home, Back, Menu and Search.

Beneath these, quite a large area is given over to three buttons which some would argue are unnecessary on an Android handset. There is a touchpad which can be used for navigating the Android interface instead of the touchscreen, as well as a pair of slender Call and End buttons. Huawei could have done away with all three and either had a higger, higher resolution screen, which might have upped the cost of the handset, or increased the size the small touch buttons making them less cramped.

The handset is made from plastic which helps keep it light at 106g. The front is almost entirely black and the backplate is a startling and very distinctive bright colour. On our review handset it was a bright blue. Purple and yellow variants are also available, as well as a black all over option. It feels reasonably solid for a budget, low-end handset.

The 199 price tag is higher than Huawei had suggested at the handset launch where they'd mooted a much more pocket friendly 99 to 129. Anywhere in that price bracket and we'd be recommending the IDEOS hands down. But at 199 we feel it is overpriced. Not only can it not take advantage of all of Android 2.2's features, such as Flash playback, but there are better handsets available which, although pricier, are worth the extra expense.

The Huawei IDEOS is an Android 2.2 smartphone and the first we’ve seen to support that version of Google's operating system out of the box rather than as a software upgrade. However, the sluggish processor isn’t fast enough to support Flash. The capacitive screen doesn’t support multitouch gestures, while its small size may be too cramped for some users to cope with. The IDEOS isn't a terrible smartphone, but it's overpriced given its limitations. Hopefully, future Huawei models will be more impressive.