HP's latest 14in business laptop has an attractive metal design, but is it all style and no substance? Kat Orphanides reveals all in our review. 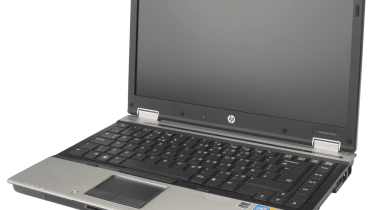 The HP EliteBook 8440p may be aimed at businesses, but it has a powerful 2.4GHz Intel Core i5 520M processor. It only has 2GB of RAM, though, so it's not quite as fast at it could be. Nonetheless it performed well in our benchmarks with an overall score of 93. Its battery also lasted respectably well in our light usage test, lasting four hours and 43 minutes. It wasn't quite as long-lasting in our heavy usage test the battery lasted just over one and a half hours before depleting.

32-bit Windows 7 Professional is pre-installed on the slightly stingy 250GB hard disk. If you want to install and use more than 4GB of RAM, the 64-bit version is included on disc. A Windows XP disc is also included, although we're not as convinced of its usefulness since Windows 7's XP virtusaliation mode should be able to run older applications.

The lid and the upper half of the laptop is constructed out of a smooth, brushed metal that feels beautifully made. The same brushed metal covers the slightly curved wrist rest, making this laptop remarkably comfortable to use. The keyboard is almost full sized, with broad, flat keys that are easy to strike accurately. There's no numeric keypad, but there are cursor and page navigation keys to the far right of the keyboard.

On the inside of the lid, next to where you'd expect to find a camera lens is a tiny LED light, which you can pop open to illuminate your keyboard when working in dark environments. This is particularly handy if you're taking notes during a presentation in a darkened conference room, although it's not quite as effective as the backlit, self-illuminating keyboards found on Apple's MacBook Pro laptops or the Sony Vaio S12.