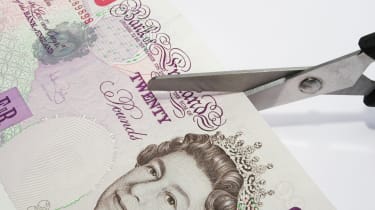 13:56 It is all getting back into the patomime politics of throwing insults and no substance now, so we are going to sign off.

Also let us know what you think of the new plans and how it will affect you and your business by emailing us at comments@itpro.co.uk.

13:52 He calls Johnson a "deficit denier." Not strictly true, we think, but not a lot of substance to Johnson's rebuttle.

13:50 Labour believes in a slower plan to solve the deficit to stop jobs being lost, concluded Johnson. Now it is time for Osborne to stand and reply.

13:49 "This spending review is not about economic neccesity, it is about political choices," says Johnson. Ok, Alan, tell us your plan?

13:46 Johnson says the NHS real terms increase in budget will be swallowed by the "top down" reorganisation of the health service.

13:44 "Spending does have to be reduced but the front line services on which people rely must be protected," says Johnson.

13:42 Expected job losses around 490,000, claims Johnson, and he quotes PriceWaterhouseCooper claiming it may be up to one million due to the impact on the private sector.

13:40 Now Johnson moves onto Nick Clegg saying "in between the ballot box closing and his ministerial car door opening" he changed his mind on how to reduce the deficit.

13:38 Johnson now going back over what Osborne said as shadow chancellor in 2007. He apparently claimed the Labour party was spending too little and only changed his mind when Lehman Brothers crashed. Also he was calling for deregulation of the banks, not more, claims Johnson.

13:36 The biggest myth is the global economic crisis is the fault of the previous Government, claims Johnson.

13:35 Johnson claims it is some of the coalition's "ideological objective" to make the biggest cuts "in living memory."

13:33 He concludes that a stronger Britian starts here.

13:32 Because of cuts in welfare and other savings, departmental cuts are going to be lower than Labour asked for - 19 per cent rather than 20 per cent. Huge jeers from the whole house.

13:28 Long term investment in science, transport and green economy will help the country to not depend on one small section of the country, claims Osborne.

13:26 Major investment to London's public transport system and next week more details on UK transport will be released.

13:23 BBC licence fee frozen for the next six years and also will help fund superfast broadband across the UK.

13:20 Huge list of investments in green technology to make Britain a "leader in the green economy."

13:19 Osborne says he will protect the science budget, saying: "Britain is a world leader in science research and it is vital to our future success."

There will be "efficiency savings" of over 320 million but he concluded he was "confident that our country's scientific output can be increased over the next four years."

13:18 Large investment in adult apprenticeships, helping 75,000 new apprentices a year by the end of parliament.

13:17 Now he moves onto business, how to rejuivante the private sector.

13:15 For 10 years those who lost money through Equitable Life have not been compensated. Osborne wants to reward those who "did the right thing" saving by covering the cost of the total relative lost and start making payments this year. It will cost 1.5 billion, two thirds of which from this spending review.

13:13 Spending on health for research will be protected.

13:12 Total health spending will rise each year over and above inflation. This year 104 billion, by the end of four years 114 billion.

13:11 No further changes to child benefit than the controversial ones already announced last week - removing it from higher band tax payers.

13:10 The welfare measures are set to save 7 billion, claims Osborne.

13:08 New cap on benefits stopping those families who don't work getting paid more than the average family who does work.

13:06 An increase in the use of digital applications will help the DWP make savings.

13:05 The work and pensions secretary is to replace all working age and tax benefits to one single payment where "it will always pay to work". It will be introduced over the next two parliaments.

13:02 The pension age is for both men and women, accelerating the age for females.

13:00 Spending 900 million more on targeting tax evasion through fraud with new IT contracts and technologies.

12:58 "I completely understand the public's anger that the banks that were so appalling regulated over the last decade.. are contemplating high bonuses."

His aim will be to extract "maximum tax revenues" from banks over a period of years but also a permanent levy on banks with legilsation to be published tomorrow.

12:55 Next month each Government department will release their plan to cut spending so public can "hold them to account."

12:52 Policing spend will be cut by four per cent year on year but aim is to take this from back office, not from Police on the streets.

12:47 Overall savings in fundings to councils of 7.1 per cent each year for four years.

12:44 The Queen is to cut 14 per cent of her budget, maybe we are all in this together! Oh, but she is allowed extra money to have a party for the Diamond Jubilee...

12:43 There will be some redundancies but it will be down to each employer to decide who and it is "inevitable" in the current climate. Osborne claims if we don't make these redundacies now to tackle the deficit, even more would come later.

12:42 Aimed to save 3 billion in Government back office costs, will deliver 6 billion by cutting admin by a third of every central government admin department.

12:41 Public sector needs to change to "serve the aspirations and expectations" of today's users rather than those of the 1950s.

12:40 First mention of us "all being in this together" gets massive jeers from the Labour benches.

12:39 "We will make sure the financial catastrophe that happened under the previous Government never happens again." Isnt this similar to boom and bust claim?

12:36 Spending reductions rather than tax rises need to make up the bulk of the deficit. Understandable from the Conservatives, not really a Lib Dem point of view though is it?

12:35 Claims that the steps the coalition has taken since May have brought us back from the poor state the last government left us in. But obviously this is not enough and there are more cuts to come.

12:33 He calls for investment in the future rather than the bills of past failure. Spending on healthcare, education, security and infrastructure are priorities.

12:32 "Today is the day Britain steps back from the brink" is Osborne's opening sentence.

12:31 Here is Mr George Osborne, Chancellor of the Exchequer, and here comes the spending review.

12:16 Cameron says he won't let out anymore "nuggets" from Osborne's speech so as not to "test their friendship."

12:12 Cameron has pre-empted his chancellor by confirming the science budget will be frozen in "cash terms" in an attempt to help "sustain economic growth."

We will let you know more details around the plans for science funding as we get them.

12:02 Good afternoon everybody. Jennifer Scott here, Assistant News Editor on IT PRO, bringing you the live news from the spending review as it happens.

First we have to put up with the pantomime of Prime Minister's Questions though! Spending Review will kick off at 12:30pm.

For the roundup of all the news, analysis and comment on the Comprehensive Spending Review, click here.