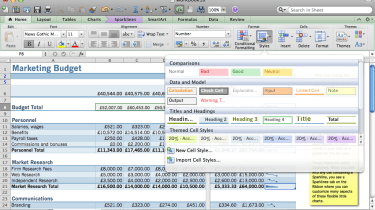 Along with Word and PowerPoint, Excel also gets a new cut-down version, the Excel Web App, which you can access from any web browser, whether or not Excel is installed on the computer you're using. This is handy for updating sheets on the move, especially since, by saving a workbook to your Windows Live SkyDrive (Microsoft's free equivalent of Apple's MobileMe iDisk) or a SharePoint server, you can edit simultaneously with other users, which Microsoft calls "co-authoring".

The Web App can display charts and other graphical formatting, but doesn't let you create them from scratch, and omits the Formula Builder, among other features. Sadly, it doesn't work on iOS devices, although you can view documents. Collaboration is also facilitated by a long overdue revamp of the Protection options, which lets you dictate exactly what users can and can't do with locked cells.

Despite a lack of revolutionary innovations, this upgrade revitalises Excel as a Mac app. Once you get past the disorienting user interface changes, it's less compromised and more usable. The omission of a few features already seen in Excel 2010 for Windows, however, is an all too familiar annoyance.

The return of Visual Basic, the Ribbon interface and new collaboration features will make many users look again at Excel on the Mac. Some idiosyncrasies and omissions remain to be addressed, but it’ll do for now.