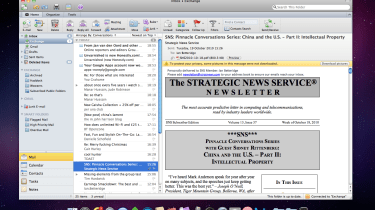 One thing that's likely to delight anyone who supports Macs is that Outlook doesn't store everything in a single database file. The monolithic database used by Entourage could grow into a multi-gigabyte file prone to corruption. Outlook uses a small database to index items, while storing the items themselves in small, separate support files. Not only does this mean there's no longer a single point of failure, but it makes Outlook's files much faster to back up using Time Machine than was the case with Entourage. However, unlike Apple's Mail program, Outlook doesn't have its own Time Machine interface for viewing and restoring backed up emails. You have to instead use the Finder's Time Machine interface to browse Outlook's support files which are stored in an obscurely named, nested set of folders isn't very easy to navigate.

Outlook's email capabilities are very good. IMAP and POP worked perfectly, and if you're using common email providers like Gmail or MobileMe Outlook does a good job of automatically configuring itself using just your email address. Annoyingly, though, some of the application's defaults can be set on a per-account basis, but not others. For example, you can only set the default format of your mail HTML, plain text, etc for all accounts. Composition in HTML mail is still limited, although Microsoft has at long last fixed the issues with forwarding HTML emails which had dogged Entourage since its first version back in 2000.