Almost every Mac user needs a word processing program, but should they choose Microsoft Word 2011? Read our review to find out. 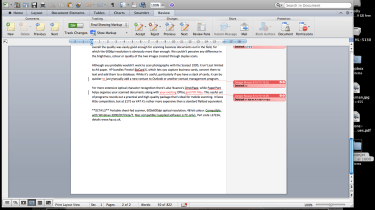 Word 2011 now integrates with the Office Web Apps, stripped down versions of the Office applications that can be run in any modern Web browser on any internet-connected computer. Files are shared between different users, whether they're running Word or its web app counterpart, using either a corporate SharePoint server or the consumer-oriented SkyDrive 25GB online storage service.

The sharing system works fairly well, although it obviously works better the faster the internet connection you have. However, occasionally inexplicable duplicates of the files we were working on appeared for no discernable reason. Documents can be edited in either Word 2011 or the web app simply by clicking on the relevant button.

The Word web app looks a lot like its desktop counterpart, but its interface feels sluggish compared to both Word 2011 and the Google Docs word processor. Its Styles options are more sophisticated than Google Docs', but it lacks Google Docs' word count feature which is just as essential for many writers.

Most of the new features in Word 2011 make the venerable word processor faster and easier to use. Although the online sharing and collaboration features still need a lot of work, and some third party tools no longer work, overall Word 2011 is still a good program for professional writers.

Although offices on a budget, especially those with less demanding users, could easily get away with using the cheaper Pages or OpenOffice which is free, Word’s new interface is less cluttered and intimidating than those programs and this alone may be enough to tempt users of rival programs.